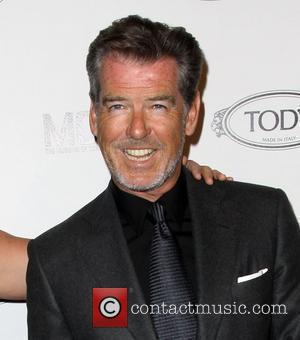 Pierce Brosnan is taking aim at U.S. leader PRESIDENT BARACK OBAMA in a new public service announcement for the International Fund for Animal Welfare.
In the PSA, the former 007 reminds Obama of promises he made about protecting sea-life when he was a presidential candidate.
Brosnan says, "As a candidate, you promised to end illegal whaling, and we applauded your leadership, but recent reports reveal your administration supports an international proposal, which gives Japan, Iceland and Norway the license to kill whales."
The famous marine conservationist recently narrated Disney documentary Oceans - a film with a powerful message.
Brosnan is now urging U.S. government officials to take a stronger stand against whale hunting in international waters.
Brosnan wants Obama and other leaders to take a no-tolerance policy: "They (U.S. government) seem to be in favour of allowing Japan and Norway to go out and hunt whales again. It means they can go out there and start killing whales. It's in moratorium so it's not determined how many they can kill. Normally, there's no justification for killing these creatures. Scientifically, there's no justification. So if you want to do something about stopping the possible slaughter of whales, then you have to pick up the phone and call The White House."
And the movie star hopes his new nature film will encourage youngsters to fight to save the world's whales.