Brosnan And Thurman To Play Gods 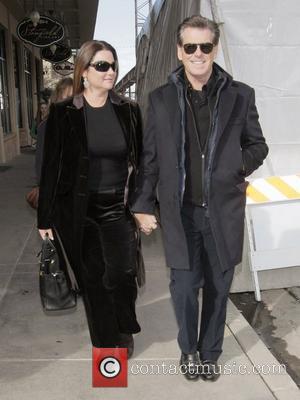 Picture: Pierce Brosnan and his wife Keely Shaye Smith out and about during the 2009 Sundance Film Festival, Day 4 Park City, Utah - 18.01.09

Pierce Brosnan is teaming up with Uma Thurman to play a pair of Greek gods in a big-screen adaptation of the PERCY JACKSON children's books.
The duo will star in Percy Jackson And The Lightning Thief, an adaptation of Rick Riordan's first novel in his popular five-part series.
The story is based on Greek mythology and centres around young Percy Jackson, who discovers that he is the son of Poseidon, god of the sea.
Sean Bean, Kevin MCKidd, and Melina Kanakaredes have also been added to the cast - joining Logan Lerman, Brandon T. Jackson and Alexandra Daddario.
Chris Columbus is to direct the movie, which is slated for release in February 2010, according to the Hollywood Reporter.