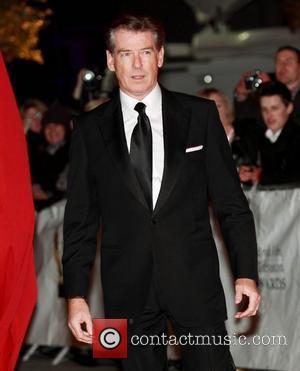 Irish stars Pierce Brosnan and Saoirse Ronan took home top acting prizes at the Irish Film & Television Awards (IFTAs) in Dublin on Saturday (12Feb11).
The former James Bond won Best Supporting Actor for his role in The Ghost, while the 16-year-old actress' turn in The Way Back earned her the supporting actress honour.
Martin MCCann was named Best Actor for Swansong - Story of Occi Byrn, while Amy Huberman was crowned Best Actress for Rewind at the ceremony celebrating the Irish film and television industry.
Bosnian war drama As If I Am Not There received three trophies, including the IFTA for Best Film, Director and Script for the film's Irish writer/director Juanita Wilson.
In the international categories, The Social Network won the top film prize, with its star Jesse Eisenberg winning Best Actor. Annette Bening took Best Actress for The Kids Are All Right.
In the TV categories, the fourth and final series of The Tudors was named Best Drama Series, while the show's producer Morgan O'Sullivan received the Outstanding Contribution to Industry Award.