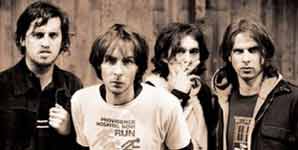 French soft rockers Phoenix have been plugging away for what seems like an eternity now trying to make ends meet with their inoffensive brand of radio-friendly r'n'r, that the saccharine coated blandness for 30 something, 'Sex In The City' loving mums and secretaries Maroon 5 and Orson have stolen their thunder.

Which is a shame because despite the occasional monotony of their songs, the likes of 'Long Distance Call' would brighten up any radio station's playlist for it's three minutes long duration and suggests that even if they haven't quite grasped the necessity of employing that one killer hook, Phoenix are heavily equipped in the tunes department, which in essence, is all that really matters.