The Hobbit: The Battle Of The Five Armies Review 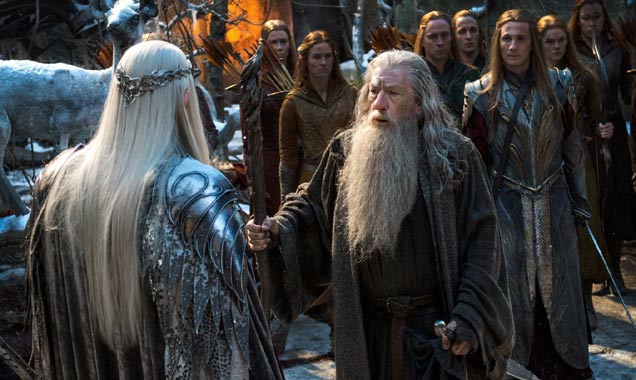 Continue reading: The Hobbit: The Battle Of The Five Armies Review

'The Hobbit' director Peter Jackson and screenwriter Philippa Boyens discuss the magic behind the trilogy as they prepare to release the final instalment, 'The Battle of the Five Armies'.

The Hobbit: The Desolation Of Smaug Review

With wittier action and a few more sharply defined characters, this second episode in Peter Jackson's trilogy is more engaging than the somewhat over-packed An Unexpected Journey. Once again, the key to enjoying the film is to distance it from the beloved novel: this is a big adventure movie as opposed to Tolkien's light-hearted romp. And that's not necessarily a bad thing.

There isn't much actual plot, as we are between the set-up and conclusion, so the film consists of a series of set-pieces as Bilbo (Freeman) and his band of dwarves continue their journey to reclaim the dwarf throne in the Lonely Mountain. Gandalf (McKellen) heads off to confront the shifty, shadowy Necromancer (Cumberbatch), while Bilbo and crew head into the creepy Mirkwood, where they confront gigantic spiders before being captured by wood-elves. This is where they meet Legolas (Bloom), whose feisty sidekick Tauriel (Lilly) falls for sexy dwarf Kili (Turner) as they continue their journey to Lake-town. There they get help from Bard (Evans) as they launch their final assault on the mountain, where the dragon Smaug (also Cumberbatch) is napping on the dwarves' vast treasure.

Jackson directs with a spark of energy and humour that holds our attention even when things begin to look a little too digitally animated (basic laws of physics apparently don't apply in Middle Earth). And each sequence also provides some depth of character, especially in the overall journey of Bilbo, nicely played by Freeman as a guy who is only just discovering his own ingenuity and bravery. By contrast, McKellen's plot is much darker as he faces off against unnerving evil. As in the first film, the other strong character is Thorin (Armitage), the heir to the dwarf throne grappling with the idea of a return to power.

Continue reading: The Hobbit: The Desolation Of Smaug Review

The Hobbit: An Unexpected Journey Review

This first chapter of Peter Jackson's new Tolkien trilogy takes us back to the familiar settings and characters, inflating a simple journey into an epic adventure in the process. This film also looks strikingly different, shot both in 3D and 48 frames technology, double the definition of film. But it's the story we're really interested in.

The events take place 60 years before The Lord of the Rings, when Bilbo (Freeman) is a younger Hobbit enjoying a quiet life. Then he meets the wizard Ganfolf (McKellen) and everything changes. Suddenly he's invaded by 13 riotous dwarves led by Thorin (Armitage), who has decided to lead an expedition to reclaim their homeland from the sleeping dragon Smaug. Bilbo reluctantly agrees to help them, and their journey kicks off with a series of adventures as they are chased by wolf-riding orcs, captured by greedy goblins and terrorised by gigantic mountain-monsters. They also call in for help from the elf leaders Elrond and Galadriel (Weaving and Blanchett), and try to convince the sceptical wizard Saruman (Lee) to back their quest.

The film opens with familiar characters as the older Bilbo (Holm) chats with Frodo (Wood) before we flash back to the start. And Jackson continues to link the two trilogies like this, with connective characters and events as well as developing the simple novel into a much bigger epic, complete with tenacious villains. All of this is hugely involving, with tense moments that are nerve-shredding as well as scenes of dark emotion and broad humour. The best sequence is Bilbo's encounter with Gollum, which vividly reveals the progress in performance-capture technology over the last decade. We can even more clearly see Serkis in Gollum this time, and it gives the film a real kick.

This film is packed with involving performances, even though Jackson takes a bloated approach to what should be a quietly emotional drama. And in the end, the production design is so lush that it swamps the story's themes.

In 1973, Susie (Ronan) is a happy 14-year-old just beginning to blossom. Her crush on a fellow student (Ritchie) is about to culminate in her first kiss, but she's instead brutally murdered by a creepy neighbour (Tucci). Her parents (Wahlberg and Weisz) are distraught, and Grandma (Sarandon) needs to come help care for Susie's younger siblings (McIver and Christian Thomas Ashdale). Susie watches all of this from "my heaven", longing for her parents to recover their balance and aching for some form of revenge.

The central theme is that Susie's yearning for vengeance is preventing her parents from moving on, and it's also keeping her from resting in peace. As the months and years pass, she struggles to let go of her connections to her family and also to dislodge her killer's hold on her. This intriguing idea is more suited to a small-budget filmmaker forced to find subtle, creative ways to depict the interaction between the afterlife and the living world.

Jackson, of course, has no budgetary constraints, and indulges in constant eye-catching effects that are drenched in colour and symbolism. This luxuriant approach seems odd for a story this fatalistic; it's not likely to be a commercial hit no matter how glorious the digital artistry is. While some viewers will connect with the raw emotional tone, concepts of the cruelty of fate and the fragility of life are lost.

Even so, Ronan delivers another knock-out performance packed with nuance and meaning even though many of her scenes only require reaction shots. It's in her eyes that the film comes truly to life, as it were. The other standouts are Sarandon, who brazenly steals scenes in what's essentially a thankless role, and Tucci, who never resorts to stereotype in his portrayal of a sinister loner. Jackson, on the other hand, continually applies cliches around him, from shadowy angles that generate palpable suspense to a ludicrously over-the-top coda that erases any subtlety the film might have.