Despite this being a film about Sherlock Holmes, the fact that it's not much of a mystery may disappoint die-hard fans, but as an astute drama it's more than worth a look because Ian McKellen is simply terrific in the title role. This is a much more complex character than he has been able to play recently either in movies (like the X-men and Lord of the Rings franchises) or television (the nutty sitcom Vicious). The film also reunites him with Bill Condon, who directed him to an Oscar nomination in Gods and Monsters 17 years ago. 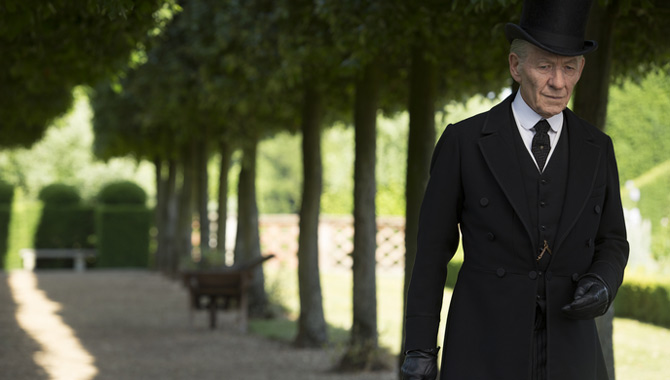 It's 1947, and Sherlock is 93 years old when we meet him, living on the Sussex coast where he keeps bees and has befriended Roger (Milo Parker), the curious son of his tough-minded housekeeper Mrs Munro (Laura Linney). As Sherlock teaches Roger about both beekeeping and sleuthing, he is also trying to work out his final case some 30 years ago, which his mind simply refuses to recall. As he relives it in his mind, rather than through Watson's embellished account, all he can remember is a worried husband (Patrick Kennedy) asking him to follow his wife (Hattie Morahan). In addition, Sherlock is also still thinking about the things he discovered while recently in post-war Japan at the invitation of a fan (Hiroyuki Sanada).

The main story and the two flashback sequences are intriguingly intertwined in Sherlock's mind, offering parallel discoveries that help him piece together events that unfold in all three. It's a clever approach that allows McKellen to dig deep into the character as a man discovering that his mind is fading, perhaps into senility. His take on Sherlock is simply fascinating, a witty detective who has always resisted the fictional depiction of him in Watson's stories. And he's also an ageing man who hasn't lost his childlike curiosity, which makes his friendship with the young Roger surprisingly tender and engaging.

By Rich Cline
Good
Lively dialog and realistically played characters help make this sporting drama engaging despite a formulaic screenplay. And even if it's rather corny, the film could be genuinely inspiring to young athletes in an Olympic year.

Gifted runner Shania (Crichlow) lives in a rough London estate, where she trains with a local shopkeeper (Davis). Despite her lack of support, she's one of the fastest athletes in Britain, and qualifies for the team in the run up to the World Championships. She's facing competition from her privileged rival Lisa (Lily James), whose father (Graves) heads up Team GB. Shania is happy running solo and, despite encouragement from coach (Clarke), isn't sure about becoming a team player and joining Lisa, Trix and Belle (Burroughs and Lynch) for the relay event.

By Rich Cline
Weak
Yet another retread of the Lock, Stock and Two Smoking Barrels, this London crime caper at least creates its setting well and has some colourful characters. But we've seen it all before.