Pharrell Williams Thrilled A Group Of Young Children And Teenagers By Bringing Them Onstage To Join Him As He Performed His Worldwide Chart-topper Happy At Britain's Glastonbury Festival On Saturday (27jun15). 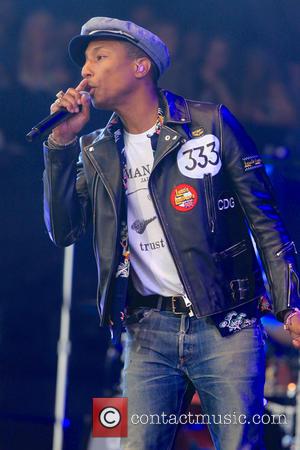 The star paraded more than a dozen mud-spattered festival-goers onto the stage and delightedly walked along giving them high-fives during his huge hit.

He also paid tribute to "pretty English girls" before inviting a group of young women to join him for his track She Wants To Move, during which one of them displayed some daring handstand tricks as Williams looked on.

One of the women, wearing a muddy pair of rubber boots, then sent him into a fit of giggles by twerking in front of the star and grinding up against him.

Williams, who was performing on the event's main stage ahead of headliner Kanye West, thanked his surprise guests by telling the crowd, "Make some noise for the English ladies on the stage."

Sunday's (28Jun15) line-up includes Lionel Richie in the coveted afternoon 'Legends' slot before a closing set by rockers The Who.