Pharrell Williams says there's no one he could rap like Jay Z and if he tried he would just sound ''braggy''. 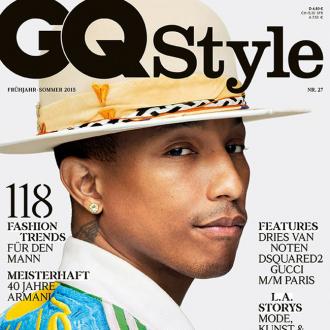 The 'Happy' singer believes all artists have to find their own voice and what works for one musician won't work for another, and he's sure he couldn't spit boastful lyrics like Jay Z.

Speaking to Germany's GQ Style magazine, Pharrell said: ''I think you have to create something new. You can't just copy the style of others. If I would sing Jay Z's lyrics, I would sound braggy, while he inspires people with his songs. Everybody has to find their own style.''

Pharrell has also dismissed artists who claim they don't want to have major success and top the charts.

The N.E.R.D star doesn't understand why you would want to record and release music if you didn't want as many people as possible to hear it and enjoy it.

He said: ''For me, it's not all about me or to be a star with a certain image. It's about being a part of something bigger and you can't control that. It does not matter how talented you are - if nobody reacts to your product you are just a guy with a demo tape or a few design drafts ... I want to connect people. Success means being supported by others. I just try to find my purpose as a part of the big mosaic the universe arranged.''

Pharrell, 41, is famous for his numerous acclaimed collaborations with artists such as Daft Punk, Nile Rodgers, Gwen Stefani and Madonna and he says he just tries to get the best out of his musical partners when he's in the studio with them.

He said: ''I just hold a mirror up to the people I am working with so that they know themselves.''