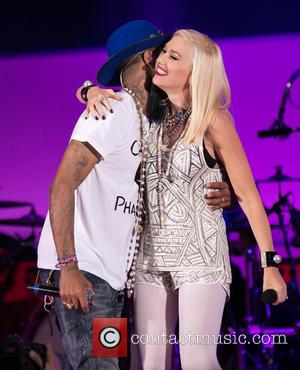 Picture: Pharrell Williams and Gwen Stefani - Celebrities perform onstage during We Can Survive 2014 at the Hollywood Bowl at Hollywood Bowl - Beverly Hills, California,...

Pharrell Williams surprised fans at a show in the United Arab Emirates (Uae) by bringing British pop star Geri Halliwell on stage to sing on his huge hit track Happy.

The Blurred Lines star put on a show in Abu Dhabi on Saturday night (22Nov14), and apologised to the crowd for a slew of vocal problems which he blamed on a nasty cold.

Williams admitted he needed some help singing his popular track Happy, so he brought out former Spice Girls star to provide the vocals. Video footage shows Halliwell performing the song while Williams dances around.

The Brit later shared her big moment with fans by posting a link to the footage on her Twitter.com page, as well as a picture of herself posing with the Grammy Award winner.

Halliwell was in the country to support her fiance, Formula One team boss Christian Horner, at the Abu Dhabi Grand Prix.