With Pharrell Performing, Who Will Win The Oscar For Best Original Song?

With the Oscars not too far away we take a break from the film hype to look at the songs nominated in this year's Best Original Song category.

With the announcement that Pharrell is to perform ‘Happy’ at this year’s Academy Awards we’re left wondering who will walk away with the coveted Best Original Song Oscar. Here’s our look at the four nominees and what chance they might have of scooping the statuette on March 2nd 2014.

Watch the video for Pharrell's 'Happy':

Pharrell Williams ‘Happy’ from the Despicable Me 2 soundtrack
With the announcement that Pharrell will be performing 'Happy' at this years Academy Award ceremony we're left wondering is this a sign that he’s the number one contender for the award? Perhaps, last year Adele performed ‘Skyfall' which went on to win the award. But what’s more telling perhaps is the song’s impressive chart performance, so far in the UK it has sold over 600,00 copies after holding onto the number one spot for three weeks, making it the most chart-sucessfull song of all the nominees.

U2 ‘Ordinary Love’ from Mandela:Long Walk to Freedom soundtrack
Rock giants U2 have already walked away with the Golden Globe for ‘Ordinary Love’, taken from the soundtrack of Nelson Mandela biopic, Mandela: Long Walk to Freedom. Due to its Golden Globe win the song is a strong contender to take the Oscar after Skyfall took home both awards last year. However many are finding it just a typical U2 song and not quite exciting enough to be the Oscar winner. It's hard to tell what the band's chances are, however at least they have one major award under their belt.

Kristen Anderson-Lopez and Robert Lopez ‘Let It Go’  from the Disney's Frozen soundtrack
Of all the nominees this is the one most cited by critics as the favourite, being hotly tipped to take home the statue. Composed by Kristen Anderson-Lopez and Robert Lopez for the animated film it is performed by actress Idina Menzel as Queen Elsa, iIt has also been recorded by Demi Lovato for the soundtrack release. This one might just be the safe bet to win the award. 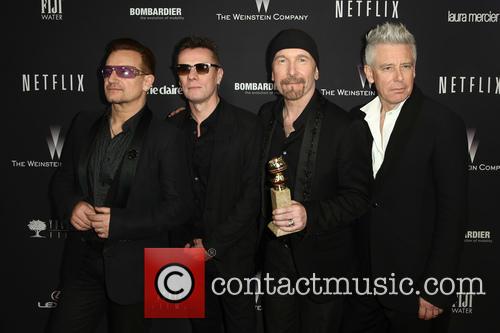 U2 at this year's Golden Globes where they won Best Song for 'Ordinary Love.'

Karen O ‘The Moon Song’ from the Her soundtrack
The Yeah Yeah Yeah’s front woman’s simple lullaby from the Her soundtrack could cause an upset this year. The song was co-written with the films director, Karen's ex, Spike Jonze and is a perfect example of simplistic beauty. It's in contrast to the usual Oscar nominated songs but don't rule it out, Her has already picked up a few awards and is definitly one to watch at the Oscars.

One song that definitely wont be picking up the award is ‘Alone Yet Not Alone’, from the film of the same name. The song had its nomination rescinded last week when it was revealed that its composer, an ex-Academy governor had violated Academy rules by contacting voters. The song is not going to be replaced leaving just four songs battling it out this year.