A Man From Maryland Has Been Charged With Defrauding South Korean Businessmen Out Of $375,000 (£234,375) After Taking Their Money To Set Up A Fake Pharrell Williams Concert In Seoul. 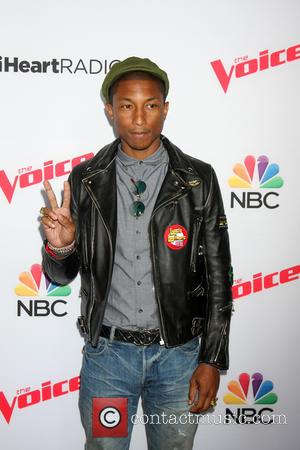 Picture: Pharrell Williams - Shots of the coaches from the TV talent show 'The Voice' a they attended the Top 8 Spring 2015 event which was...

Ghanian native Sigismond Segbefia was arrested by FBI agents at New York's John F. Kennedy Airport on Tuesday (21Apr15) and hit with a slew of counts amid allegations he swindled large sums of money from unsuspecting victims.

Among the charges is a scam he reportedly pulled on bosses at steelmaker Dosko Co. Limited in South Korea, who wanted to organise a show with Williams through a Japanese booking agency.

Segbefia is accused of tricking both parties into believing he was the Happy hitmaker's "legal representative" and in August (14), convinced Dosko executives to wire the funds to Eastern Stars LLC, a firm he set up in Maryland to make his business deals seem legitimate.

Representatives at the two companies only realised they had been duped the morning after Dosko representative David Cho had transferred the money.

Segbefia, 28, is also facing other accusations of wire fraud, bank fraud and identity theft relating to a number of unrelated alleged cons.

He has since been released on bond and placed on house arrest until his court hearing in Pittsburgh, Pennsylvania on 14 May (15).

A spokesperson for Williams has yet to respond to requests for a comment.