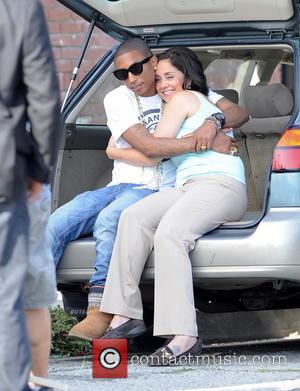 Stars including Pharrell Williams and Jared Leto turned out to celebrate rock legend Bono's 54th birthday on Saturday (10May14).

The U2 frontman gathered his friends and family at his manager Guy Oseary's sprawling mansion in Los Angeles for the big bash.

The party served as a double celebration for Bono's family - he shares his birthday with daughter Jordan, who turned 25.

They were treated to surprise performances by Happy hitmaker Williams, Jon Batiste, Herbie Hancock and rapper A$AP Rocky, who personally sang 'Happy Birthday' to Jordan, according to Us Weekly.

Master illusionist David Blaine also made a splash at the party, wowing the crowd with underwater tricks.

An insider tells the magazine that Charlize Theron and her boyfriend Sean Penn gave Bono a bizarre gift by hiring a performer who transforms his body into characters with shaving cream. Theron was unable to attend the party as she was hosting U.S. sketch comedy show Saturday Night Live in New York.

Bono continued his birthday celebrations the following day (11May14), when he joined George Clooney and fiancee Amal Alamuddin for lunch in Malibu, California to celebrate their recent engagement.