Pharrell has just been on a roll over the last few years while we've been waiting for him to release a second solo studio album. In 2010, he composed the film score to the much adored Golden Globe nominated animated film 'Despicable Me' and since then things only seem to be getting better for him. He has appeared on three number singles from other artists since he released his last one in 2006, but now he's well and truly back as a solo star in his own right as he releases a brand new single entitled 'Happy' which he wrote for the much-anticipated 'Despicable Me 2'. 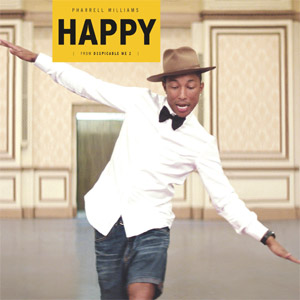 There's not a lot you can criticise with 'Happy'; with Pharrell's classic soul voice it has a strong Motown feel - it's simple and archetypal with no embellishments. Unbelievably catchy, it's definitely the kind of song that makes you want to dance and sing along - an important element for any children's film tune. More importantly, it's infectiously cheerful with its summery vibes that ease that seasonal misery winter often brings and it's just so wonderfully innocent - not something often found in your average modern pop song.

It gets a little repetitive after a while, but maybe that's the beauty of it; it's uncomplicated with a very clear sentiment, and see if you don't clap along ("if you feel like a room without a roof...")!