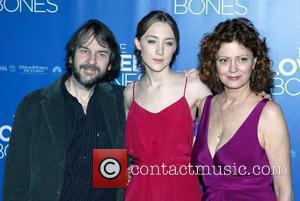 Moviemaker Peter Jackson has defended his decision not to show the rape and murder of a teenage girl in his adaptation of ALICE SEBOLD's bestseller THE LOVELY BONES, revealing he felt "morally conflicted about the whole thing".
The horrific act is spelled out in the book, but Jackson and his co-producer wife Fran Walsh couldn't bring themselves to make it part of their movie, and instead showed actress Saoirse Ronan - as tragic Susie Salmon - escaping the cornfield pit where she was brutally killed as a ghost.
The director has been criticised by fans of the book for not showing the horror of the sex act and what followed - but he insists he made the right decision, and knew he could never film such a scene shortly after shooting began.
He tells Entertainment Weekly magazine, "Showing it (rape and murder) didn't feel right for our take on the story."
And he also didn't want to titillate sick film fans: "There's a tiny proportion of people out there who enjoy watching that sort of thing. We felt pretty morally conflicted about the whole thing."