Contact Music caught up with Peter Hook, renowned bass player with New Order during the period in which their use of emerging technology made them Britain's most innovative band. At home in Manchester, "Hooky" told us about Hacienda 30, a new release cataloguing the sounds and DJ's who made the legendary Hacienda one of the most famous clubs in the world, amongst many other things...

CM: Tell us more about Hacienda 30...
PH:
We finished off (Factory's) 30th birthday celebrations with a party in May in the car park at the apartments which are where the Hacienda used to be. It was part of a number of events, and we wanted to put together a release that celebrated the DJ's during the club's most famous era as a venue, between 1988 and 1991, so we chose probably the two most prominent ones, Graeme Park and Mike Pickering. I'm amazed that it's been thirty years since we opened the place!

CM: Your own mix features Manchester favourites The Stone Roses and Happy Mondays, but how did you choose the rest of the tracks?
PH: After doing the original mix (Hacienda Acid House Classics, released in 2009) I wanted to delve a bit deeper into some of the tracks that might've been missed. What really surprised me at that time was that there were still quite a few licensing problems which meant I couldn't use certain ones at that point, but this time round some of those issues had been sorted out. I've found that your mind plays tricks on you sometimes as well, and music that you thought was great, in hindsight isn't as good as you remember it, and vice versa. I wanted to do a Madchester one as well as I felt that was so important. That may well see the light of day next.

CM: Not a lot of that music lives on now in terms of influencing "Modern" music. Do you think it was simply a soundtrack to a party?
PH: What I have noticed during the last couple of years (At the new Hacienda venue) is that younger audiences are much less ageist than I was. To them a great track is a great track.

CM: You see that at indie gigs now, where the audience knows every word to the Beatles and the Stones...
PH: Yeah. Weirdly, as I came from punk where we were trying to get rid of every old sod, I thank god we never got our own way. Audiences now are full of a cross section of people, some of which have just been introduced to the music being played. It's a great thing.

CM: Famously, the original Hacienda lost money for years, was there a eureka moment where the acid house idea just clicked?
PH: Rob Gretton (New Order's original manager) had been championing dance music for a while. At the same time (Hacienda booker) Mike Pickering was playing lots of Chicago house and Detroit techno, long before it became fashionable.

CM: How much was the experience influenced by your trips to New York in the early '80s?
PH: We first went over in 1980 and we spent time in the clubs there and with producer Arthur Baker. But the original inspiration for the Hacienda came from dark, seedy clubs. Tony Wilson, however, went firing off the other way... it was very odd. But Factory and the Hacienda created such a unique legacy by being a collection of mistakes, by constantly being in a state of experimental open mindedness, not being closed in by any kind of convention. Rob and Tony weren't bothered about making money, or making people love them. They did what they wanted to do. Whenever I used to complain about the "Grey area" between New Order's finances and the running of the place, Rob famously said to me "You can't buy a heritage".

CM: You recorded Technique in Ibiza during the summer of 1988, and it's widely acknowledged as New Order's most acid house influenced album. Did the scene at the club inspire that?
PH: Acid house didn't really take off until we got back from Ibiza. When we did, we found that it really happened very quickly, the intensity accelerated spectacularly. It was quite shocking really, but it was special to be a part of it.

CM: Did anyone ever point out the irony of the fact that it was money made from selling Joy Division records that had effectively funded this intensely vibrant, hedonistic experience?
PH: You need to remember that The Hacienda for its first six years was a "Gigging" type of club, which featured all types of acts. So I suppose that original audience had been well served, but Rob always wanted a throbbing club, and musicians are a pain to deal with. During that initial period audiences were very fickle, and it was a hit and miss: you'd put people on who just drew nobody. When you got to acid house though, the first four years - late '87 to '92 were special. Then the gang problems drove people away.

CM: How symbolic do you think it was that after the Hacienda closed that the building ended up as a yacht showroom and then an exclusive block of flats?  Would Tony Wilson have approved?
PH: Tony had grown quite frustrated by the end that we hadn't been quite as business-like as we could've been, as that would have given us more security. But he had a wicked sense of humour, so I think he'd have been alright with what happened, shall we say.

CM: It was kind of the mother of all super clubs really...
PH: I think the key to that was that Rob and Tony were very forward looking about the people they used. Some of them were pretty inexperienced, but it meant that they weren't really constrained in their thinking and went for it. Sometimes their ideas worked, sometimes they didn't.

CM: The kind of innovations we don't see much of now.
PH: These days things have to be really traditional, because of the economic situation. Knowing their characters I'm glad that Rob and Tony aren't running a club these days, because you can't take the sort of risks they did and survive financially: It breaks my heart. We've managed to get the Factory building back from the developers, who were going to change into an apartment block, and I thought it's just going to go the same way as the Hacienda went. I felt that unless we did something about it, all the love that the people at Factory put into it would be wasted, which would've been criminal.

CM: Do you think the "New" Hacienda is a bit like an anchor for the scene in Manchester now?
PH: It's got its critics, but most people seem to really enjoy it, and no-one's surpassed it. I hope it's an inspiration for people in the city, rather than people viewing it any other way. What we're seeing now is DJs using the past and shaping future music. When I listened to Graham and Mike's mixes I was really happy for them to get the output because it's nice to the see the people responsible, who made the musical end of it special to get the recognition. I hope we get the chance to do more with other DJs like Nipper, or even Sasha, who worked at the club back then.

CM: People have short memories. Is it important that they're reminded about the DJs as the people who engineered such good times for them?
PH: Absolutely. In my sets I try and mix in old and new tunes and everyone's very happy. It's usually old people who complain! Look, if I don't try to move it forward by sticking a Tinie Tempah track in, who will?

CM: A lot of people are seemingly trying to do musically what you were doing in New Order in the early '80s. Given the amount of technical problems you used to have, are you pleased everything's on laptops now?
PH: I use CDs and some people say to me "Are you on a USB yet?". I won't let it get to that. Whenever I watch DJs, I like to see a bit of animation, somebody actually doing something. To be honest if it goes to USB, I'm going to vinyl! I spend all day over a laptop, and I don't think it works when you see someone try to do it. I know it's progress, and when I'm in the gym I love having 4,000 tracks to listen to, but the audience do watch you, whether they're supposed to or not. Ultimately, it might sort the men out from the boys.

CM: It will! You're touring with your band The Light, playing early New Order albums Movement and Power, Corruption and Lies. How does that feel?
PH: Movement was a very, very difficult record to make. Whilst it sounds very upbeat and positive, the vocals are very tentative, because those of us singing just sound so nervous, so lacking in self-esteem. It drove (Producer) Martin Hannett mad, but musically though I think it's a cracking record. When you get to Power, Corruption and Lies it was definitely a big step up. When we recorded Movement I think we were all searching for something that we found on that next record. When I was preparing for the tour I listened to Power Corruption and Lies and again and I think it sounds wonderful, really fresh and classic. When you get to later ones, however, like Low-Life or Brotherhood, because of the synthesisers we were using, they now sound a bit dated.

CM: We still love Technique...
PH: There was quite a lot of tension in the band when we made Technique, but we sound like we had quite a good time. It was a weird contradiction not liking each other but at the same time making a great album, but Tony Wilson said to us afterwards that artists have to hate each other to make great music. I think he was more worried we'd start to like each other...

Hacienda 30 is out now on New State Music. 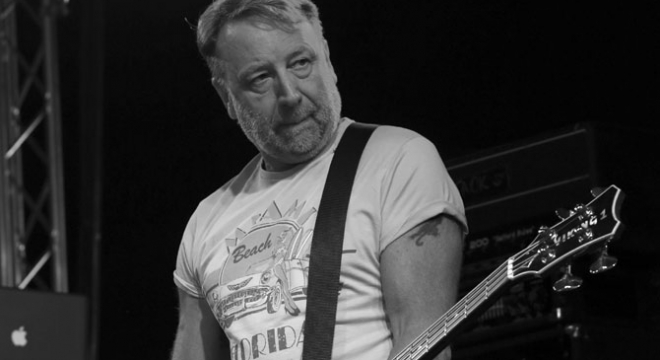