Type http://www.itstartshear.com , the rather unwieldy name of Peter Broderick's latest full-length, into your web browser and you are taken to a site containing streams and notes on the dectet of tracks that make up the album, along with an area that allows listeners to make comments on these tracks, with Mr Broderick often taking the time to reply to these comments. It is an interesting concept, but one which seems slightly misplaced in the hands of the young American composer. The Kaiser Chiefs' 'pick the album you want' concept made sense, as did the announcement that the title of Reverend & The Makers' new full-length would be his twitter handle, but such a gimmick is not something you would expect from the prolific mult-instrumentalist. 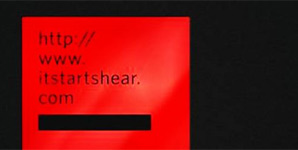 Nor is it needed, as It Starts Hear is an inspiring work that more than stands out for its own merits. It shows another side of Peter's enviable talents, moving further away from his debot, the stark piano-led Float, into expansive autumnal pieces that explore new ground and take risks whilst still feeling familiar. The opening triumvirate of 'I Am Piano', 'A Tribute To Our Letter Writing Days' and 'Blue' are sweeping alt-country gems that breathe the same hazy evening air as Sufjan Stevens circa-Seven Swans and My Latest Novel, but with a structure more reminiscent of Efterklang and their fellow Nords Jaga Jazzist. All three begin with a naked piano part or acoustic guitar line, and a wealth of layers, from glockenspiel and drums to strings and vocals, are slowly unfurled on top or beneath.

Peter has in a recent interview commented on his newfound love for Arthur Russell, the cult purveyor of myriad genres most well-known for his more dance-orientated work, and this shows in the following two tracks, the first which introduces a more 'electronic' sound and sees Peter nonchalantly uttering the album's title in the chorus, whilst the latter contains manipulated fragments of vocals submitted by fans. Such use of unconventional methods was championed by Arthur Russell, and on It Starts Hear it helps to create a midpoint that stops the album from dragging as its closing stages start to resemble its beginning.

However, again it must be stated that this is not gimmickry or curveball throwing for the sake of it; it is merely a by-product of a young genius who is at an age where most artists are in the stages of forming a career path but finds himself admirably fighting against a typecast, and on It Starts Hear Peter Broderick offers another glimpse into the mind of one of the most inventive and intriguing musicians of modern times. 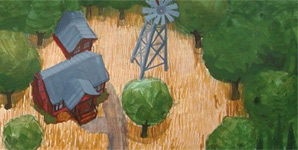