Pete Townshend The Who Roger Daltrey

Veteran Rocker Pete Townshend Is "Sleeping" His Way Through The Who's Gruelling Farewell Tour As It Is So Easy For Him After 50 Years Of Performing Onstage. 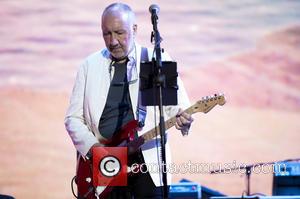 The iconic rock band has been on the road for a final tour since late last year (14) but within weeks they had to axe two shows in London when his bandmate Roger Daltrey was struck with a throat illness.

The string of dates is not due to come to an end until November (15) and Daltrey fears he will struggle with almost every show, but guitarist Townshend, 70, has now revealed he is finding the tour easy.

He tells Mojo magazine, "The reason I can do it with The Who and not solo is that I don't even do half the work! I'm doing this tour in my sleep, it is so easy you can't imagine. Roger, on the other hand, is struggling, battling, fighting, unsure as to whether he's going to be able to get through the gig. I just go out and play a few chords, (windmill my arm) a few times, and everybody thinks I'm a genius. I jump up and down and they say, 'Oh, look, he's so fit!' It's very easy to do..."