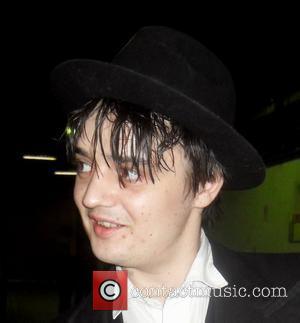 Picture: Pete Doherty appearing rather worse for wear stops to sign autographs for fans after a gig at the O2 Academy Birmingham. Birmingham., England - 28.03.09

British rocker Pete Doherty has landed himself in a new heap of trouble after police discovered class A drugs in his possession during a positive drink driving stop.
The Babyshambles singer was arrested early on Thursday (11Jun09) after local authorities spotted him driving erratically as he left a gig in Gloucester, England.
He spent much of the morning in police custody before being charged with drink driving and drug possession.
He is due to appear before magistrates in Stroud on Friday (12Jun09).
It's the latest in a long line of legal problems for Doherty, 30, who spent 14 weeks in prison last year (08) after breaching a probation order for charges relating to previous drugs and driving offences.
Doherty also spent time behind bars in 2003 after breaking into the house of his former Libertines bandmate Carl Barat.
Earlier this week (beg08Jun09), Doherty, 30, was arrested after he was allegedly caught taking non-prescription drugs during a flight from London to Geneva, Switzerland. He was fined and released.
His latest arrest came after a solo show in Gloucester on Wednesday night (10Jun09).
Doherty is scheduled to perform in Derby, England on Thursday evening (11Jun09). Organisers are unsure if the gig will go ahead following the rocker's latest legal woes.