Those bright sparks at Pixar have done it again, taking a fiercely original approach to animated filmmaking that connects with both adults and children. Intriguingly, this movie will be a very different movie depending on your age, because it explores the point where childish happiness gives way to more complex emotions. The basic idea may not be completely original, but the way director-cowriter Pete Docter (Up) approaches it is inventive, provoking constant laughter and even a few tears. 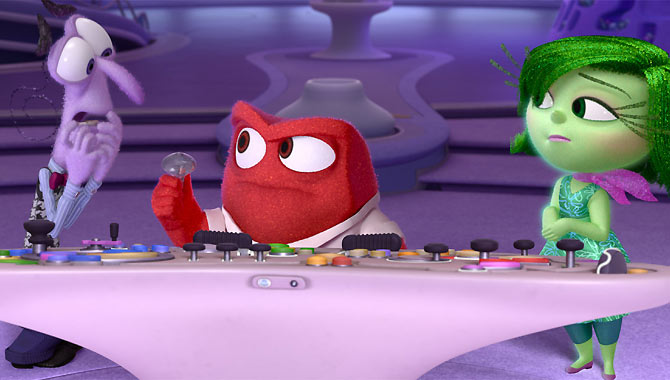 It's set inside the mind of 11-year-old Riley (voiced by Kaitlyn Dias), where the control room is run by Joy (Amy Poehler), who struggles to keep the darker emotions in check. Sadness, Fear, Anger and Disgust (Phyllis Smith, Bill Hader, Louis Black and Mindy Kaling) aren't easy for Joy to manage. And when Riley's parents (Kyle MacLachlan and Diane Lane) move the family from Minnesota to San Francisco, Riley's difficulty fitting into her new environment causes serious turmoil in her mind. Joy and Sadness find themselves lost in the recesses of Riley's memory, and must team up with Riley's forgotten imaginary friend Bing Bong (Richard Kind) to get back to headquarters, where Fear, Anger and Disgust are making a mess of everything.

As expected, the animation is simply gorgeous, combining bright colours and all kinds of textures to create both the real world and the expansive universe inside Riley's head. These things will provide both laughs and thrills, while grown-ups will also engage with an extra psychological layer of meaning, as Joy and Sadness travel through abstract thought to get to the imagination and ultimately to dreams, which are like a full-on movie studio that uses memories to create sleep-time blockbusters. There's also a brief but freaky visit to the subconscious. Through all of this Joy and Sadness discover that they need each other to function, which adds a surprisingly moving kick to everything that happens along the way.

Continue reading: Inside Out Review

'Inside Out' Lets Amy Poehler Bring The World Some Extra Joy

This 'emotional' movie had to avoid making happiness annoying.

The new Pixar movie Inside Out is about the emotions swirling around in an 11-year-old girl's head. "Joy was the last emotion to be cast," says director-cowriter Pete Docter, "and it was the most difficult of any of the characters to write for because she had a tendency of being really annoying." Joy is a relentlessly chirpy cheerleader, he says. "You wanna sock that person!" 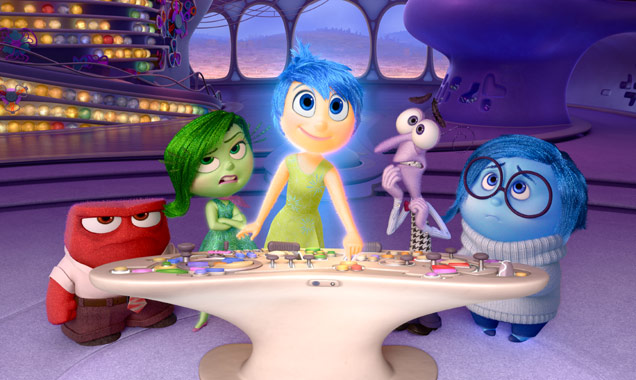 'Inside Out' brings together Joy, Fear, Anger, Disgust and Sadness

Enter Amy Poehler, ideal casting for the role after her years as the happy control-freak Leslie Knope on Parks and Recreation. She was thrilled by the project: "From the minute they told me I was like, this is the best movie ever made! And it will be the only good movie I've ever been in. And I can't believe I'm in it."

Continue reading: 'Inside Out' Lets Amy Poehler Bring The World Some Extra Joy

Continue reading: Pixar's 'Inside Out' Gets The Critics Emotional At Cannes Premiere

Riley is an ordinary young girl growing up, thought she has some very real hurdles to get over as she enters into her teen years. Her parents have decided to move from their home in the Midwest, all the way to San Francisco after her father finds his career leading him to the city. It's not easy getting used to calling somewhere else home, nor is it to change schools, make new friends and fit in with a neighbourhood, so it's unsurprising there's a whirlwind of emotions going on in her head. Those emotions? They are Joy, Fear, Anger, Disgust and Sadness and they are not making life easy for Riley. Living in the Headquarters of her brain, they are forever arguing about how best to deal with Riley's situation, and while Joy is trying to make the best of what has happened, the others aren't so forthcoming.

Continue: Inside Out Trailer

Inside Out - Lava Clip

Uku is a volcano living in the isolated tropical beauty of Hawaii and desperate to find someone to love him. He sings about his lonliness and his attention is soon grabbed by fellow volcano Lele - but does she feel the same way?

'Lava' is a short film directed by James Ford Murphy and produced by Andrea Warren. It will be released alongside a new Disney animation entitled 'Inside Out', which stars Amy Poehler, Mindy Kaling and Bill Hader.

Riley is struggling with her and her family's move from the Midwest to San Francisco after her father lands a new job in the city. Growing up is difficult at the best of times, but now her emotions are really starting to get the better of her. Joy, Fear, Anger, Disgust and Sadness live in the Headquarters inside Riley's brain and are constantly at odds - arguing over the best coping mechanism to deal with growing up, her new home, new school and new friends. Joy wants to remain upbeat and optimistic about the future, while Fear can't bear with the new surroundings. Anger and Sadness are lamenting leaving the Midwest, and Disgust will do anything to get Riley away.

Continue: Inside Out - Lava Clip

Continue reading: Meet ‘Inside Out’ Pixar’s Next Movie, Which Could Be Their Best Yet

The prequel to Monsters Inc., Monsters University, is soon to be released in July this year seeing the return of the lovable Mike and Sulley.

It's been more than 10 years since the Oscar winning animation Monsters Inc. hit our screens in 2001, but even though those who were young enough to enjoy it then have probably grown out of it by now (or, at least, say they have), there's no question that this hilarious prequel will still be a must-see for all you Mike and Sulley lovers out there. It sees the two beastly individuals (voiced by Billy Crystal and John Goodman) in their college years, majoring in 'scaring' and victimising each other in an array of schoolboy pranks as they compete against each other to be the scariest monster around. Funnily enough, plenty of the kids who watched Monsters Inc. when it first came out will quite possibly be going through similar experiences in their own lives as students, which makes the timing of Monsters University charmingly apt.

The movie sees a brand new director, Dan Scanlon, who is likely to breathe fresh life into this memorable CGI flick though the previous director, Pete Docter, has made his return in the role of screenwriter alongside previous co-writer Andrew Stanton. Monsters University is soon to be released on UK cinema screens on July 12th 2013.

Continue reading: Mike And Sulley Return To Our Screens As Students At The Monsters University (Pictures)

Watch the trailer for Up