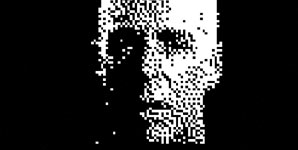 Pet Shop Boys signal the release of their new album 'Disco 4' with a groundbreaking video for the single, 'Integral'. Picking up on the song's theme of ID cards and the erosion of our civil liberties by government, new creative group the Rumpus Room has conceived and created a sinister mix of surveillance type footage and information technology. Embedded in this dystopian film are single frames of QR Code ( a new Bar Code technology - QR stands for Quick Response - that is readable by the camera in your mobile phone ): pause the video on the QR Code 'frame', take a 'snapshot' with your mobile and the camera 'reads' the QR Code ( in the same way scanners at a supermarket checkout read your shopping items ).

Once your mobile has 'read' the QR Codes in the video your mobile will have a link to various sites chosen by Pet Shop Boys that are highlighting campaigns for freedom and civil liberty.

There are two versions of the 'Integral' video available - the first is a low resolution 'graphic' version optimized for portable devices (mobile phones, PDA's etc.,) the second a higher resolution for traditional broadcast needs. Both versions successfully mix the 'fluid' technology of the internet ('links' etc.,), the new way we consume film and video ('pause', 'rewind' etc.,) and the new tools ( 'QR Codes', camera-phones etc.,) that we can use to read/encode our environment.