Quote: "I got high with him in the basement of the Palace when he came to Los Angeles, and I hung out with him at one of the MTV awards shows... We had a mutual respect. I think the cat had the right idea, he had the right attitude... I thought he was a very gentle soul and who knows what would have become of him had he lived." Jane's Addiction star Perry Farrell on his respect for late Nirvana star Kurt Cobain.

Quote: "I was so influenced by Paul MCCartney and the Beatles that, when I was in kindergarten, I faked a British accent and told everyone I was from England. I was born in 1959 and can sing every Beatles song." Rocker Perry Farrell can't wait to welcome Sir Paul MCCartney to his Lollapalooza festival in Chicago, Illinois later this year (15).

Quote: "It's hard, because when they behave badly, one side of me says, 'I should correct them.' The other side says, 'That's a man after my own heart.' I put them over to their mother." Reformed rock wildman Perry Farrell finds it difficult to discipline his two sons.

Quote: "There's been this kind of uncontrollable energy, to the point where my whole body would shake. Going from 70 to 90,000 people a day is a big jump... It's a nerve-racking thing and it can lead you to the point of breaking down and crying... But, looking back at the whole weekend, this is one of the great moments of my life. No matter what happens from here, I had a great moment in the sun." Rocker Perry Farrell on his Lollapalooza 20th birthday spectacular in Chicago, Illinois at the weekend (05-07Aug11).

Fact: .JANE'S ADDICTION star Perry Farrell has put his bachelor pad on the market for $1.6 million (£1 million). The Venice, California home was designed for him by architect Stephen Ehrlich.

Quote: "I look at us like a farm - you've got a goat, you've got a pig, you've got a bull, and you've got a rooster, and sometimes the bull doesn't like the goat, but when you put these animals together, it's a great farm. I'm the ram." Perry Farrell gets bestial as he talks about the differences between him and his JANE'S ADDICTION bandmates.

Quote: "I went to Perry Farrell's birthday party in Las Vegas at the weekend... It was at the Mirage, at this thing called the Bare Pool... It's clothing optional for girls. I thought, 'That's my nightmare - a room full of boobs...' but luckily everyone had their clothes on." Actress Christina Applegate, who underwent a double mastectomy after she was diagnosed with breast cancer last year (08).

Quote: “What you have there is a moment in time that forces you to reflect on everything that is precious about your life. I wish for them to recover and grace the stage for us again.” Rocker Perry Farrell's thoughts are with pals Travis Barker and ADAM `DJ AM' GOLDSTEIN, who were involved in a plane crash in South Carolina late on Friday night (19Sep08) shortly after performing with the former JANE'S ADDICTION frontman.

Quote: "I was in disbelief to learn what happened to all of them. I can still see how happy AM looked after his show." Rocker Perry Farrell is still in shock after hearing of the tragic plane crash in South Carolina at the weekend (19Sep08), which killed four and left pals Travis Barker and ADAM 'DJ AM' GOLDSTEIN with severe burns.

Fact: JANE'S ADDICTION star Perry Farrell's Kidzapalooza concert at the Hollywood Bowl has been scrapped. The kid-friendly Lollapalooza event was scheduled to hit Hollywood in September (08), but has now been postponed until next summer (09) due to artist scheduling conflicts.

Quote: "Here we go again. You up for it...? I do that in my living room in my underpants and it's not as much fun." Rocker Perry Farrell was openly thrilled to front the reunited JANE'S ADDICTION at the NME Awards US in Los Angeles on Wednesday night (23Apr08), where the band performed and received the Godlike Genius Award.

Quote: "This is what happens when I go through my BlackBerry." Rocker Tom Morello on how he persuaded pals like STEWART COPLELAND, Perry Farrell, Slash, Pete Yorn and the Mc5's Wayne Kramer to join him onstage for the launch of his Justice Tour in Los Angeles on Tuesday night (15Apr08).

Quote: The first time I came to London with Jane's Addiction, Heathrow Airport had lost my luggage, so I jumped in a cab and spotted this sex shop in Soho. That somewhat created by rubber and fetish-wear look for the next few years." Perry Farrell reveals his greatest wardrobe secret.

Fact: Perry Farrell is the only artist to have performed at all eight Coachella Festivals in California. The former Jane's Addiction star played with his new band Satellite Party yesterday (28Apr07). 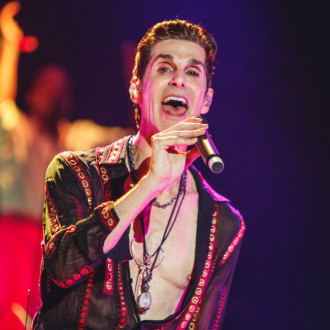