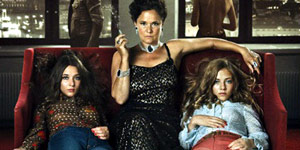 A confident drama about a real-life 1976 political scandal, this Swedish film is expertly tells...