Cruz And Bardem Inducted Into New Spanish Walk Of Fame 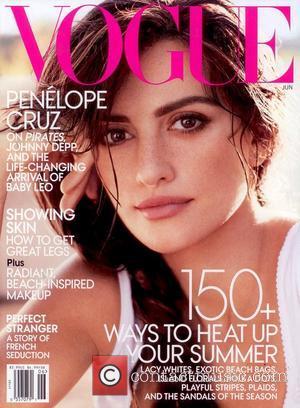 Picture: Penelope Cruz appears on the June 2011 cover of Vogue magazine USA - June 2011 Supplied by WENN does not claim any ownership...

Penelope Cruz and her husband Javier Bardem were inducted into Spain's Walk of Fame on Monday (27Jun11) as part of the organisation's opening ceremony.
The Vicky Cristina Barcelona stars showed up to the Calle Martin de los Heros area in Madrid to be honoured at the Street of Stars.
The couple took it in turns to pose in front of their own sidewalk plaque, while other celebrities inducted include actor Antonio Banderas, singer Julio Iglesias, tenor Placido Domingo and director Pedro Almodovar.
It is the second street honour for Cruz this year (11) - in April (11) she unveiled her star on the Hollywood Walk of Fame.