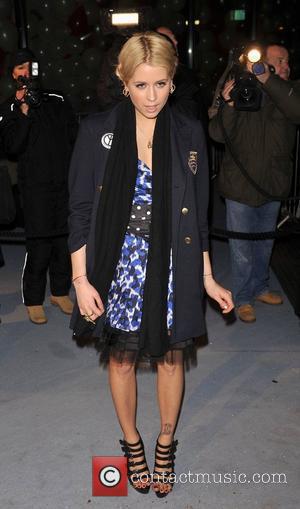 Another close pal of Peaches Geldof's later mother Paula Yates has allegedly expressed deep concern over the rock offspring's lifestyle, after snaps of the star half-naked and looking intoxicated hit the net.
Saucy pictures of Sir Bob Geldof's wildchild daughter went online last week (ends28Mar10), showing the star on a bed, exposing her breasts with her legs in the air.
The pictures were posted by a man who claims to have enjoyed a drug-fuelled one-night stand with Geldof in Los Angeles in November last year (09).
Geldof's lawyer subsequently slammed the claims, stating: "The allegations that our client was carrying and injecting heroin are denied."
The 21-year-old went on to lose a lucrative modelling deal with U.K. lingerie brand Ultimo.
Gerry Agar, a close friend of Geldof's mother Yates, who died in 2000 from an accidental heroin overdose aged 40, reached out to his pal's daughter - urging her to give up her "toxic lifestyle".
And now Yates' best pal, Belinda Brewin, has reportedly told a friend that the wildchild's father needs to act quickly if he is to stop Peaches spiralling further out of control.
According to Britain's Daily Mail, Brewin says, "Everyone can see what's happening, but would you really want to be the one to have to tell Bob he's got to do something? If she was my daughter, Peaches would be in her second year of university, not living alone in Los Angeles."