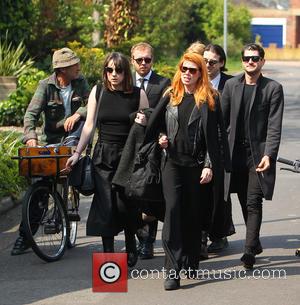 Tragic socialite Peaches Geldof was receiving treatment for heroin addiction for two-and-a-half years before her death.

Bob Geldof's daughter had been taking heroin substitute methadone and undergoing weekly testing, but her husband Thomas Cohen told an inquest in Kent, England on Wednesday (23Jul14) he suspected she was back on drugs earlier this year (14).

He told the hearing he confronted his wife in February (14) and she retrieved a stash of heroin from the attic of their home and flushed it down the toilet as he watched.

The model/Tv presenter died at her home in Kent in April (14) at the age of 25 in a chilling echo of her mother Paula Yates, who passed away from a heroin overdose in 2000.

Geldof's body was discovered by Cohen in a bedroom at the property on 7 April (14), and the inquest was told that when police later searched the home they discovered 6.9 grams (0.2 ounces) of heroin, several needles, and a burnt spoon.

The coroner, Roger Hatch, confirmed the death was drug-related.

He expressed his sympathy for the Geldof family but in a reference to the death of Yates, he stated the tragedy was not "history repeating itself" as Geldof had been trying to beat her addiction.

In 2011, Geldof sparked rumours she was on drugs after she was photographed at a fashion event in London with dark rings around her eyes and bruises on her arm, but she denied using heroin, claiming the marks were caused by skin condition psoriasis.