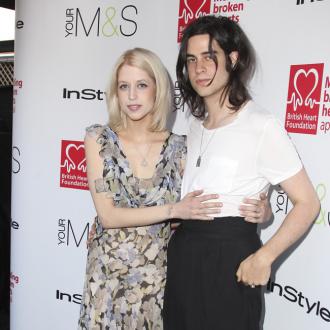 Peaches Geldof has been found dead.

The 25-year-old mother-of-two, the second eldest daughter of musician Sir Bob Geldof and Paula Yates, passed away this afternoon (07.04.14).

Police were called to an address near Wrotham, Kent after someone expressed concern for the welfare of a young woman.

A spokesperson for Kent Police said: ''At this stage, the death is being treated as unexplained and sudden.''

Peaches has two sons, Astala, who is set to turn two on April 21, and Phaedra, whose first birthday will be on April 24, with her husband Thomas Cohen.

The blonde beauty married the lead singer of the South East London band S.C.U.M on 8 September 2012 at a church in Davington, where her mother's funeral took place almost 14 years ago.

Peaches' mother Paula died of a drug overdose in September 2000 when she was just 11 and during an interview with Elle magazine in 2012, she admitted she was still coming to terms with the loss.

She said: ''I remember the day my mother died, and it's still hard to talk about it. I just blocked it out. I went to school the next day because my father's mentality was 'keep calm and carry on','' she said.

''So we all went to school and tried to act as if nothing had happened. But it had happened. I didn't grieve. I didn't cry at her funeral. I couldn't express anything because I was just numb to it all. I didn't start grieving for my mother properly until I was maybe 16.''

She was previously married to rock musician Max Drummey but they separated in 2009 after a six-months.