By Rich Cline
Very Good
Gifted French filmmaker Morel explores fairly dark themes in his films, refusing to make things easy for his characters. And this strikingly involving film is no exception, following a relationship that starts out rather bleakly and gets increasingly unnerving. 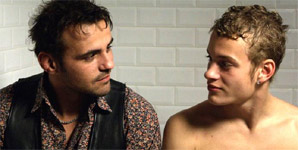 At age 30, Vassili (Rideau) works the streets in Paris but finds that his clients are getting older. So he starts quietly killing them. When he rescues 20-ish Angelo (Durdaine) after an attack, the two start to fall for each other even as they continue pulling tricks. And although Angelo asks him to stop, Vassili continues murdering their johns. So they leave the city to see Vassili's friend Anna (Dalle)and her young son (Morisset). Together they head to an idyllic mountain cabin to visit Vassili's mentor Victor (Flamand), where Vassili has a terrible idea.

After introducing us to a half-dozen employees, the film tosses out its story, which has a leering patron obsessing over one of the girls. Why? She looks just like his ex-wife, who he murdered, spending years in jail for the crime. Meanwhile, each peep starlet suffers through her own crisis (one's a drug addict, one has a baby she's trying to raise on the sly inside the peer show, most are just broke) until the zippy 83 minutes of the film are up.

By Don Willmott
Very Good
Though brightly lit by the harsh Mallorcan sun, El Mar is a film of tremendous darkness, a troubling meditation on history and violence and sickness of both the body and the soul. Set during the difficult days of the Spanish Civil War and then ten years later in the first years after World War II, it considers the fates of three children of violence who grow into young adults without successfully processing all the horrors they've seen.

As children, Francisca, Ramallo, and Manuel witness seemingly random firing squads in their dirt-poor village. Members of their own families are killed before their eyes, and when another child taunts Ramallo, saying his father was a bad guy, Ramallo has no problem with killing the kid by bashing his head against a rock and then stabbing him in the throat for good measure.

Though brightly lit by the harsh Mallorcan sun, El Mar is a film of tremendous...