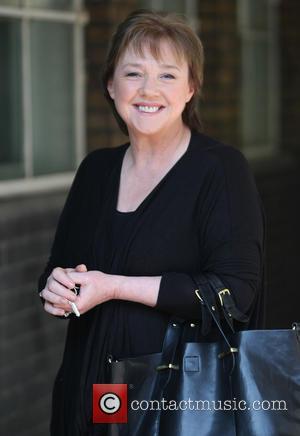 British actress Pauline Quirke described celebrity publicist Max Clifford as "an honest and decent man" when she testified at his trial on Monday (07Apr14).

The Birds of a Feather actress took to the witness stand at Southwark Crown Court in London to defend the public relations guru, who she has been friends with for more than 20 years, having met him through their shared work for the Rhys Daniels Trust charity.

She told the court, "We are good friends, we've been out for dinner, Max has been to my house for dinner, I've been to his house, he was at my wedding, I was at his wedding.

"We didn't have any holidays together or that sort of thing, but I would say he's a good, decent man... I've been in his company on a number of occasions and found him very down to earth, a normal, decent man."

The actress also told jurors that she had never seen or heard of him behaving inappropriately with any woman, adding, "I've never heard any rumours (about that)".

Sky Sports Tv presenter Clare Tomlinson, who worked as his personal assistant for six months in 1991, also defended Clifford, denying suggestions his office was a sexually charged environment, saying, "I wouldn't be here giving evidence if I believed that Max was capable of that sort of thing."