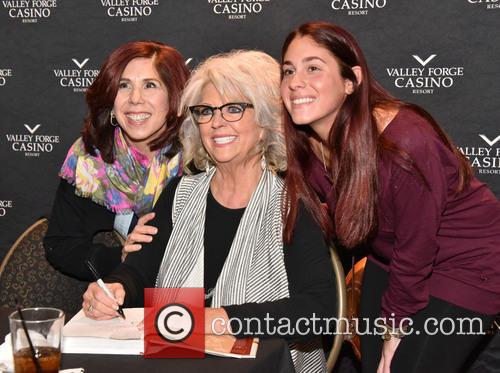 The celebrity chef has made a successful comeback into the limelight after her career was seemingly over due to her racial scandal in June 2013.

Paula Deen's successful career as a celebrity chef came crashing down in June 2013 after she admitted using the N-word while under oath in racial discrimination lawsuit. The aftermath was devastating, the 68-year-old lost millions of dollars from endorsement and sponsor deals, who didn't want to be associated with her name.

Deen recently opened up about returning to the limelight

However, Deen has now successfully rejuvenated her career via launching her very own digital network. But the journey back into the limelight, which she spoke candidly about while appearing on Tuesday's Meredith Vieira Show, wasn't easy due to the frequent scrutiny.

The 67 year-old chef will reveal her cooking secrets and host an array of segments on her own digital network that will launch this coming September: "Y'all can get my recipes, tips and cooking anytime you want."

The celebrity chef, who used to star on the Food Network, has been given her own digital network, Paula Deen Ventures announced on Wednesday (June 11th).

The interactive digital site is expected to be launched this coming September, and will give food fans exclusive access to Deen's own Southern cooking recipes on iPhones, Smartphones, computers and tablets.

Paula Deen wants to lose her label as a racist and be simply known as a celebrity chef. The 67 year-old claims to relate to how NFL prospect Michael Sam feels, as he doesn't want to be just known as a gay football player.

Paula Deen's career came to an abrupt end nine months ago, while under oath she admitted to using the N-word in the past.

The aftermath was devastating, as the celebrity chef lost millions of dollars from endorsement and sponsor deals, who didn't want to be associated with her name.

But no the 67 year-old has stated she is "fighting to get my name back", while featuring on the cover of this week's People Magazine.

Dennis Rodman took the top spot, with Paula Deen and Anthony Weiner coming behind him

Dennis Rodman topped one of the least desirable end of year lists going, as GQ placed the North Korea-infatuated former NBA star at the top of their annual 'Least Influential People' list. Rodman took home the dubious honour, which was awarded to Mitt Romney last year, beating politicians, pop stars, actors and actresses to the top spot thanks to his strange connection with North Korea and its dictator Kim Jong Un.

Described as a "Q-list celebrity willing to commit borderline treason just to hang out with a dictator who himself aspires to be a Q-list celebrity," by QG (reprinted by the Associated Press), Rodman won't be letter his minute influence get in the way of continuing his self-imposed peace mission in the dictatorship as he continues to travel back and forth to the Asian nation. Rodman revealed this week that he intends on going back to North Korea for the umpteenth time next month, this time going for an exhibition basketball tour.

By Victoria Pavlova in Lifestyle / Showbiz on 15 September 2013

After a summer spent in hiding, Paula finally stepped out at the Metro Cooking & Entertaining event in Houston

Paula Deen has been keeping a relatively low profile ever since her racism scandal from June, when she admitted to having used the n-word. The former Food Network chef attended the Metro Cooking & Entertaining Show in Houston, Texas on Saturday, where she gave a rather emotional display. Paula broke down crying, while the audience burst into a ten-minute round of applause, according to People.

"These are tears of joy, y'all," she said. "This is my first time out in three months. … The one place I wanted to make my first step out was in Texas. You are forgiving folks with hearts as big as your state."

This might be the most controversial 'Law & Order' episode yet.

Some might question the appropriateness of a Law & Order: SVU episode for tackling Paula Deen’s racism scandal, not to mention the sore topic of the Trayvon Martin case. Still, the rather mixed up storyline has been given the go-ahead. In the upcoming episode, Cybill Shepherd will play Jolene Castille, a celebrity chef (they’re really throwing subtlety out the window on this one, people), who shoots and kills a black teenager in a hoodie on the upper West Side. And here’s the kicker: Jolene shoots, because she believes she’s being pursued by a rapist. The character claims self-defense because she knew the detectives were after a rapist who fit the description, according to TV Guide.

Paula Deen's racism scandal is clearly referenced, but in a rather troubling context.

So, let’s review: Paula Deen reference: check. Trayvon Martin reference: check. Rape fears used as plot device: once again, check. It sounds like the episode, also starring Arrested Development’s Jeffrey Tambor as Jolene Castille’s defence lawyer and Smash’s Leslie Odom Jr. as, wait for it…a minister. While the topics of rape and racism (not always separately) have once again become hot button, divisive issues in the US, the show seems to be reducing them to one-episode story arcs. According to an interview with Entertainment Weekly, however, the writers actually intended for this to be a divisive, controversial episode.

Chef and businesswoman Paula Deen has been partially victorious in a case launched against her by a former restaurant worker, Lisa Jackson. Jackson alleged that, although she herself was white, there was a pattern of racial discrimination against African-American workers at Uncle Bubba's Seafood and Oyster House restaurant in Georgia. Jackson also claims that she experienced sexual harassment from Paula Deen's brother Earl "Bubba" Hiers during the five year period she worked at the Savannah eatery.

Ms. Jackson, who had managed Paula Deen's restaurant until 2010, claimed that widespread racial discrimination in the organisation had created a difficult working environment for her, and were "more personally offensive" to her because her nieces are biracial. She also accused Mr. Hiers of making lewd remarks and displaying pornography at the restaurant.

By Victoria Pavlova in Lifestyle / Showbiz on 21 June 2013

Much like Paula Deen's gravy, the plot thickens in the lawsuit against her. But is she a racist, or just old?

After her deposition in a discrimination lawsuit raised a number of criticisms, Paula Deen has come out with an explanation. In the deposition, Deen admits to having used racial slurs on a number of occasions in the past. The Food Network regular freely admits to having used the n-word at times of stress or frustration. In her defense though, she’s, well, old. Or at least that’s the line of defense Deen’s company is going with.

The following statement from Paula Deen Enterprises has been provided by TMZ, who quoted a sstatement from the company as saying: "During a deposition where she swore to tell the truth, Ms. Deen recounted having used a racial epithet in the past, speaking largely about a time in American history which was quite different than today."

Yes, it seems like they’re going with the classic “those were different times” excuse. But the statement goes on: "[Paula] was born 60 years ago when America's South had schools that were segregated, different bathrooms, different restaurants and Americans rode in different parts of the bus. This is not today. To be clear Ms. Deen does not find acceptable the use of this term under any circumstance by anyone nor condone any form of racism or discrimination."

Continue reading: Paula Deen Excuses Her Racist Slurs With The Standard "Those Were Different Times"