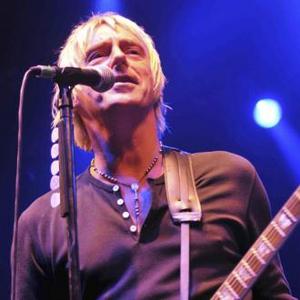 The rocker performed an intimate show at London's 100 Club as part of the Converse Represent series of concerts and told the small crowd - which included Beady Eye rocker Liam Gallagher - he was delighted to see a ''fellow stylist'' do so well at the 2012 Olympics.

The former Jam star was delighted to perform at the 350-capacity venue, telling the audience: ''It's great to be back in London. It's been a while.'''

The crowd were equally thrilled by the intimate gig, with Paul's daughter Leah Weller tweeting to say: ''Watching my dad at the 100 club! Great atmosphere!''

Paul's set began with 'From The Floorboards Up' followed by 'Wake Up The Nation' and he later performed The Jam's 'In The City' and 'Broken Stones'.

Former Oasis frontman Liam enjoyed the gig so much, he reportedly promised to the venue's owner that he would perform there with Beady Eye, a source told NME.com.

Blur will perform at the 100 Club tonight (02.08.12) to continue the Converse Represent shows.