Irish Rocker Bono Took Time Out From U2'S Concert In New York On Thursday Night (30jul15) To Pay Tribute To Those Who Came To His Rescue When He Fell Off His Bicycle In The Big Apple Last Year (14). 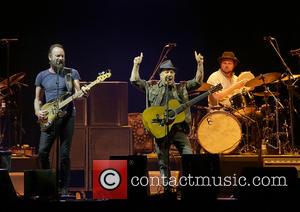 The band has been playing a residency at fabled Manhattan venue Madison Square Garden as part of their latest world tour, which was thrown into jeopardy in November (14) when the frontman was involved in a horrific accident in Central Park which left him with multiple fractures and breaks to his left arm.

He has bounced back from the crash, but he remembered his rescuers while on stage with the group on Thursday, paying tribute to a woman in the audience called Alyssa who was first on the scene and dialled 911 for him, and the firefighters who also helped out.

Bono told the crowd, "I am here today because some people, when I crashed my bike here in the city, a beautiful girl made a phone call to 911. She's from Denver, but she's here tonight. And so is Engine 44, the firefighters that picked me up off the ground."

According to Billboard.com, the singer then handed his microphone to Alyssa, who added, "So I have to clarify, it's Alyssa and I'm from (Washington) D.C., not Denver... Here's what happened: I was running in Central Park, there was an accident, obviously I had to stop and help because I'm not from New York, I'm from Virginia, where people are nice."

During the show, Bono also paid tribute to late music icon Lou Reed, whose widow Laurie Anderson was also in the crowd, by singing the rocker's track Satellite of Love, and he staged a collaboration with music legend Paul Simon, who came onto the stage to perform his song Mother and Child Reunion.