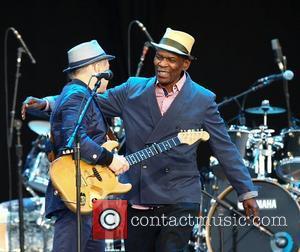 It was a special moment for Paul Simon last night in London (July 15, 2012) as he reunited with some of the faces that helped him to make his true seminal solo album 'Graceland', as the 70 year-old musician rolled back the years to play the classic in full in the UK capital's Hyde Park. The previous night the venue had attracted some controversy after officials elected to pull the plug on Bruce Springsteen's marathon set after he went over curfew - in spite of the fact he was performing a collaboration with Beatles man Paul McCartney at the time.
However, there was none of that last night, just an ageing legend and his best-known solo album as Simon rolled back the years. It was South Africans Hugh Masekela and Ladysmith Black Mambazo who collaborated with the artist on 'Graceland' over 25 years ago and he was reunited with them on stage for a joyous evening that saw him also open with a cover of Jimmy Cliff's 'The Harder They Come'.
Simon has attracted criticism of late that his voice is sadly on the wane, but few in attendance seemed to be complaining about that on Sunday night, with the mercurial artist finishing off with some Simon And Garfunkel classics including 'The Sound Of Silence' and 'The Boxer' before finishing his encore with 'Still Crazy After All These Years'.