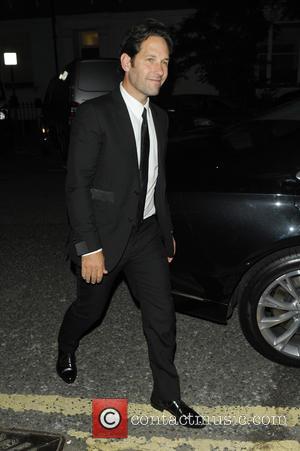 The team came back from a 2-0 loss to beat the New York Mets in extra innings, and Royals fan Rudd was there for the victory.

The 46 year old, who was a teenager when the Royals last won the World Series, watched the game from the stands and then joined the players in their locker room, where he was drenched with beer and champagne.

Rudd, who grew up in Kansas City, even spoke to reporters about the victory, telling them, "What am I even doing down here? I make movies. I'm a kid from Kansas City. I have no reason to be down here at all or to be talking to these players. It's great."

It was also a big night for Modern Family star Eric Stonestreet, who couldn't make it to the game.

The Royals win means he wins a bet with U.S. late-night host Jimmy Kimmel, a lifelong Mets fan. Kimmel must now prepare himself for a paintball clash in a bouncy house - with Stonestreet as the shooter.

Stonestreet celebrated his team's win by tweeting, "I'm very happy for my hometown of Kansas City. I wish I could be there to celebrate with you all."

Kimmel congratulated the winning team and added, "A pox on Eric Stonestreet."

Baseball fans Colin Hanks and Josh Duhamel also offered up congratulations to the Royals, while Patrick Schwarzenegger showed off a bet he made on 25 May (15), writing, "Made the bet for the royals to win it all on May 25th. Pretty cool."