We get a closer look at Marvel's Ant-Man.

So after the Ant-Man trailer that refused to show anything other than Paul Rudd and a bit of Michael Douglas, Marvel has now released a series of new pictures including some behind-the-scenes moments and a clearer look at Evangeline Lily's Hope Van Dyne and Corey Stoll's villain Darren Cross.

Cross, who wears shrinking suit the Yellowjacket, is the main challenger to Rudd's Scott Lang and Michael Douglas' Hank Pym. He also has access to the "Pym Particles" that can shrink matter and has crafted his very own, much more dangerous version, of the Ant-Man suit.

Other images show Rudd and Douglas smirking while taking a break for filming and Lily looking all brooding and important, with the same haircut as Gemma Arteton in.some film. Another still shows filmmaker Peyton Reed giving Rudd some direction on the snazzy set of the movie. 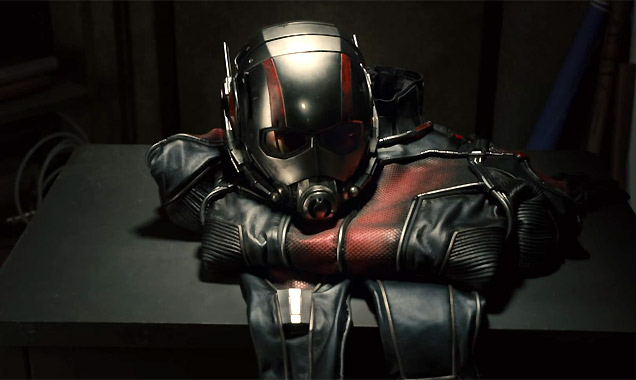 Despite its directorial changes and concern that it doesn't boast any real marketable stars (Isn't Douglas big enough for you?) Ant-Man has an incredibly talented cast, including Judy Greer, Bobby Cannavale, Wood Harris, Michael Pena and John Slattery - sort of a who's who of the best actors of the past couple of years.

Though clearly Marvel will be prioritising The Avengers: Age of Ultron in 2015 - perhaps to see it become the highest grossing movie of all time - Ant-Man has little to contend with in the way of firm competition. The Minions animated movie opens a week before the Marvel effort, while only Judd Apatow's Trainwreck is pencilled in for the same weekend, with most studios inclined to leave the date well alone.