Utterly bonkers, this movie confounds any attempt to categorise it, blending comedy, romance, horror and drama to become a true one-off. And it maintains such a darkly playful tone that it's impossible not to smile even as things turn rather hideously nasty. Against all odds, these contradicting moods come together into something surprisingly involving, thanks to skilled director Marjane Satrapi (Persepolis) and clever writer Michael R. Perry. Their approach is so inventive that it's impossible to guess what might happen next. 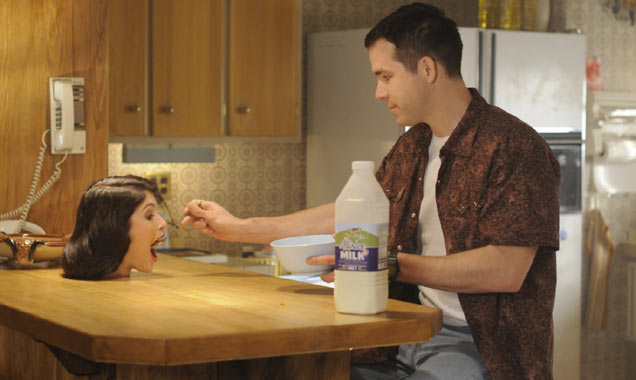 Set in a small industrial town, the story centres on Jerry (Ryan Reynolds), who was set up with a job in a bathtub factory after his release from a psychiatric institute. Overseen by therapist (Jacki Weaver), Jerry is settling in nicely. He has a crush on Fiona (Gemma Arterton) in accounting, even though it's actually her office colleague Lisa (Anna Kendrick) who likes him. But no one realises that he has gone off his meds and is starting to listen to advice coming from his lovable dog Bosco and his evil cat Mr Whiskers. What they tell him to do is pretty horrific, but he thinks that this is the only way to get his life back on track.

Where the plot goes is seriously grisly, but it's played out by the cast and filmmakers in a blackly comical way that's highly stylised, seeing everything through Jerry's warped perspective. The question is whether he's a serial killer, an insane criminal or an emotionally tormented young man. Whatever, the film is a remarkably internalised exploration of mental illness, because the tone refuses to let us off the hook. And because all of the performances are riotously funny, bridging the gaps between the humour, romance and violence.