Smith Didn't Want To Record Springsteen's Because The Night 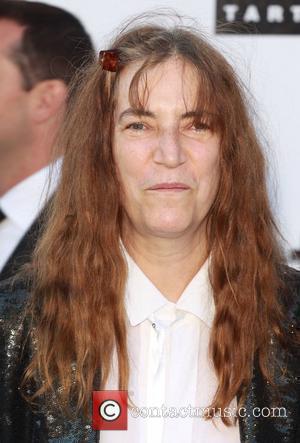 Punk icon Patti Smith initially resisted recording Bruce Springsteen's BECAUSE THE NIGHT - but a late night vigil as she waited for her then-boyfriend FRED 'SONIC' SMITH to call persuaded her to hit the studio for her biggest hit.
In new Springsteen documentary Promise: Darkness at The Edge of Town, Smith recalls the night she first heard Springsteen's idea for the love song - a track he was too afraid to complete.
She says, "I was in my apartment and I was having a long-distance romance with (Mc5 star) Fred 'Sonic' Smith... who was supposed to call me, and I waited for him to call me for hours and thought, 'Well, I'll listen to that darn song'. It was so accessible, it had such an anthemic tone, it was in my key.
"I still tried to resist it but I filled in the blanks and in the blanks it tells the story of me waiting for Fred to call and of my love for Fred.
"Fred did call at about three in the morning and I wasn't mad at him, because, by the time that he called, I had written my share of the lyrics to my one and only hit song."
Springsteen recalls, "A real love song like Because The Night, I was reticent to write. I think I was too cowardly to write it at the time. But she (Smith) was very brave, she had the courage... She turned it into this really beautiful love song.
"Her working on it has been a tremendous gift to me."