Punk Rocker Patti Smith's Memoir Just Kids Is Set To Be Adapted For The Small Screen. 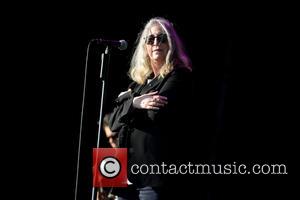 Executives at Showtime made the announcement during their panel at the Television Critics Association's summer press tour in Los Angeles on Tuesday (11Aug15), revealing Smith will be co-writing and producing the limited series based on her award-winning tome, which centres upon her relationship with late artist Robert Mapplethorpe.

Following the announcement, Smith released a statement about the new project which reads: "A limited series on Showtime will allow us to explore the characters more deeply, enabling us to develop stories beyond the book and allow a measure of unorthodox presentation. The medium of a television limited series offers narrative freedom and a chance to expand upon the themes of the book."

Just Kids earned her the 2010 National Book Award for Nonfiction.

Meanwhile, Showtime president David Nevins also announced rapper Common is executive producing an as-yet-untitled pilot for a coming-of-age drama, focusing on a young African-American man growing up on the mean streets of Chicago, Illinois, and funnyman Jim Carrey will be returning to TV in a drama called I'm Dying Up Here, set in the 1970s comedy world.