Patti Smith's eleventh studio album Banga may be named after a dog, but it certainly isn't one. While the high priestess of punk poetry may still be a challenging proposition for the casual listener, her unique brand of literary grown up rock is rewarding nonetheless. At the age of 65, she serves up a thick soup of images drawn both from the front pages of the newspapers and the deep recesses of the history books. 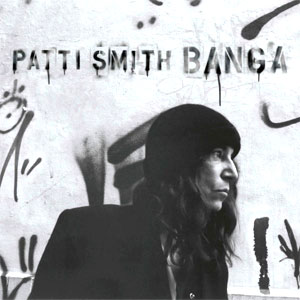 It also seems that Patti's recent memoir Just Kids has reinvigorated her creative juices. Banga is her first album of original material since 2004's Trampin' (2007's Twelve was a covers record), however it bears many of the hallmarks of her earliest material, not least because Banga was released on the 36th anniversary of her debut Horses and was recorded in the same studio. Another parallel is that there's urgency to her performance which ultimately overcomes some of the problems of the dense and sprawling lyrical reference points. Musically, Banga is more focused than much of her more recent work, primarily because Lenny Kaye's guitars don't allow the tracks to become a pleasant backdrop for Patti's musings.

"Hey, wake up!" Patti says on opener 'Amerigo', as she re-imagines the 1492 discovery of the new world. It's a sign that much of the material here has a dreamlike quality. That includes the rose tinted nostalgia of 'April Fool' and the improvisational reflection of classical history throughout 'Constantine's Dream'. There's also a strong religious undercurrent with monks praying at the start of 'Fuji-san', and elsewhere talk of baptism and heaven. But Patti's lyrics don't ever feel heavy-handed; they're instead waiting to reveal their secrets with each subsequent listen.

Patti's reflections on more recent events don't feel out of place either. It's a trick she's used before ('About A Boy', for example, eulogised Kurt Cobain), but she channels other artists in order to pay her posthumous respects. In this case, it's Amy Winehouse ('This Is The Girl') whose "blood turned into wine". The song is given more poignancy because of its composition, it slithers along almost as if it's waiting for Winehouse to appear and start singing. Not content with highlighting the loss of an individual, Patti also tackles the loss of a nation. The aforementioned 'Fuji-san' examines the aftermath of the 2011 Japanese earthquake and Tsunami. Yet both tracks have a reverence that makes them feel almost hymn like, which connects them to the themes found elsewhere on the album.

Despite the heavy subject matter, there's also a warmth to the performances on Banga, due to the wider roster of musicians. Television's Tom Verlaine is featured here, as is a little of Johnny Depp's guitar playing. Patti's son and daughter also make frequent contributions, culminating in Jessie Smith's haunting piano on closing track 'After The Goldrush'. Patti's impressive update on the Neil Young classic features a chorus of children (classmates of bassist Tony Shanahan's nephew), which rather than feeling overly sentimental, reinforces the cross generational nature of Patti's assembled musical family. Banga has many facets and certainly isn't without minor faults, but ultimately it's a success amongst Patti's back catalogue because its heart is in the right place.