Review of The Magic Position Album by Patrick Wolf 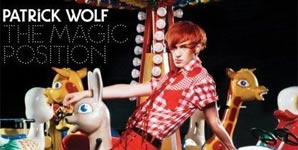 In casual circles, Patrick Wolf is being regarded as something of a newcomer, even though he has already produced two albums in the last five years. The Magic Position though, is arguably his most accomplished effort to date.

It is an astonishing solo effort, with the bulk of the incredibly diverse instrumentation, and production all handled by Wolf himself. The album displays an incredibly varied sound palette, each track sounding different, but still part of the same skewed universe. The title track is a whirling piece of pop that sounds like Holland-Dozier-Holland if they had been born on Mars, whereas "Augustine" is a stirring piano ballad that veers as far away from Keane-isms as possible.

Granted, there are a couple of tracks that could be described as filler, "X"is just a few seconds of snivelling violin, but they do all fit together into one pretty jigsaw puzzle.

The Magic Position is a brilliantly schizophrenic album that will establish Patrick Wolf as a truly unique artist and one that will continue to produce excellent music for quite some time.