Review of The Bachelor Album by Patrick Wolf 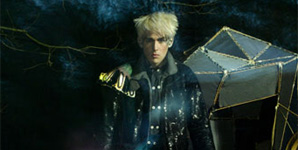 What time is it Mr. Wolf? It's time to open your ears and your mind a little more.

The best place to start exercising those attributes is by listening to the most recent sounds created by the forward-thinking futuristic maniac Patrick Wolf. The man is a musical wizard and from under his cloak he pulls a harp, a clavinet, a harpsichord, a guitar, piano, auotoharp, organ, mountain dulcimer, clavichord, harmonium, accordion, theremin, ukulele, harmonica, mandolin, violin, viola and some spoons - large cloak
.
The style with which Wolf commands his instruments is impressive, as he varies from electro pop power ballads through to deep and resonant love songs, with a peppering of modern Irish folk melody. His new album 'The Bachelor' is an experimental mix of styles held together with bold classical instrumentation and passionate vocals.

The original title for this two part release was going to be 'Battle', but subsequently changed to 'The Bachelor' and we can expect the follow up album 'The Conqueror' to be released in 2010. The album depicts Wolf's emotional metamorphosis from depression and dark feelings of political unrest with songs like 'Battle' and 'Count of Casualty' to the more hopeful and optimistic outlook of songs like 'Hard times' and 'Theseus'.

I watched Patrick Wolf play Leeds festival back in 2007 and I'm grateful to this day that my attention was diverted away from the main body pile towards the Carling stage. Under the spell of this Pied Piper, the festival rats scuttled forth towards the cosily packed tent. The eerie carnival atmosphere and abundant energy of this 25 year old British singer songwriter drawing people closer and making them spontaneously wave their limbs in a spasmodic manner. The Bachelor recreates the feeling I got when watching him for the first time and is definitely worth waving your limbs to.