Sir Patrick Stewart Was Literally Scared Into Signing On For New Movie Green Room After Starting To Feel Alarmed In His Own Home As He Read The Script For The Brutal Siege Film. 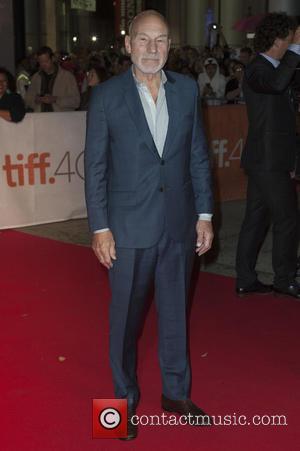 The Star Trek icon reveals he felt so rattled as he sat alone in his house, he immediately ran around the pad ensuring the place was secure - and it was that frightful feeling which made him agree to star in writer/director Jeremy Saulnier's unnerving thriller.

He tells People.com, "I began reading just as dusk was falling and around about page 40, I closed the script and I got up and I went around my house - because I was alone - making sure that all the doors and windows were locked...

"Then I switched on all the perimeter lights around my house. I don't do that! The movie had undermined me and made me feel so unsafe, I knew without a doubt it was what I wanted to do next."

Green Room, which debuted at the Toronto International Film Festival over the weekend (12-13Sep15), stars Stewart as a successful club owner who has to take drastic action when a murder occurs during a punk band's gig.

He explains, "Something happens - which is no fault of his, or no concern of his, really - which threatens his livelihood, his career, his business, everything is at stake.

"So he has to quietly, methodically work out a plan in which he can prevent the collapse of his existence from happening. Unfortunately, in order to bring this about, these four young people have to die."

Stewart adds, "I thought it would be interesting to (play) a decent, quiet, thoughtful individual, who is really trying to do the best he can in a difficult situation, which happens to involve machetes, pit bulls and box cutters."