Sir Patrick Stewart Has Come Out In Support Of The Northern Irish Bakers Who Sparked A 'Gay Cake' Debate By Refusing A Request From A Customer Who Asked For A Same-sex Marriage Slogan In Icing. 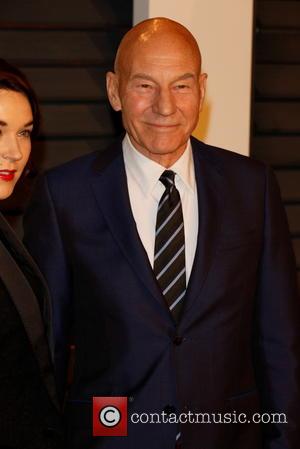 Picture: Patrick Stewart and Sunny Ozell - A host of stars were photographed as they attended the Vanity Fair Oscar Party which was held at the...

The owners of the Ashers Bakery in County Antrim hit headlines last month (May15) when they were taken to court for refusing to decorate a cake with the message "Support Gay Marriage" above a picture of Sesame Street characters Bert and Ernie.

Bakery bosses insisted they did not want to complete the order because the message went against their Christian beliefs, but they lost their legal fight and were fined $800 (£500).

Their cause has now been taken up by X-Men actor Stewart, who is adamant the bakers were right to defend their religious beliefs.

Speaking on U.K. TV show Newsnight, he says, "I found myself on the side of the bakers... It was not because it was a gay couple that they objected, it was not because they were celebrating some sort of marriage or an agreement between them. It was the actual words on the cake they objected to. Because they found the words offensive... I would support their rights to say 'No, this is personally offensive to my beliefs, I will not do it'."

Stewart has a long-term friendship with openly gay actor Sir Ian McKellen and The Lord of The Rings star even officiated at his wedding to jazz singer Sunny Ozell in 2013.