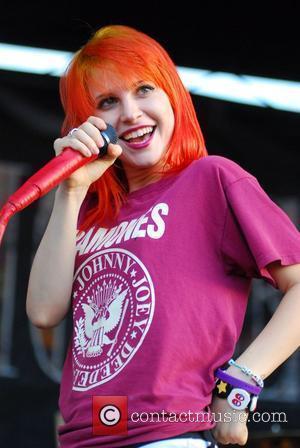 Paramore star Hayley Williams has revealed she and Taylor York staged a band summit last year (10) to prevent a split.
Williams founded the cult rock band in 2004 with Jeremy Davis and brothers Zac and Josh Farro and together they welcomed York as an official member in 2009.
The Farro brothers left Paramore in 2010 in a bid to form their own group and Airplanes hitmaker Williams admits their departure prompted concerns about the band's future - because she assumed Taylor would follow suit.
She tells Alternative Press, "When Josh and Zac were leaving, me and Taylor weren't close at all at that point. Me and Jeremy were always pretty tight through the last few years. But I was pretty sure that it was just going to be me and Jeremy. I was really scared Taylor was going to leave too."
However, Williams' worries subsided after the two sat down for an emotional heart-to-heart: "Me and Taylor went to a show in Nashville (Tennessee) and after we went out to eat and he was like, 'You know, I'm not ready to go anywhere. I still have more to do in Paramore.'
"I just got in my car and cried and then wiped the tears away and thought, 'OK, we're going to be all right'."