Paramore to launch new album 'After Laughter' ahead of their European tour.

Paramore returns after four years with their fifth studio album 'After Laughter' this Spring, coming alongside a series of UK and European tour dates and a new single entitled 'Hard Times'. The album also sees the return of a long absent original band member.

'After Laughter' follows Paramore's self-titled previous album which topped UK and US charts in 2013. Produced by Justin Meldal-Johnsen and the group's own rhythm guitarist Taylor York, who previously worked on 'Paramore', the album also sees the original drummer Zac Farro return after seven years.

All pre-orders of the album will come with a free instant download of 'Hard Times'. A video directed by Andrew Joffe for the single has now been launched featuring the band performing against flamboyant backdrops of clouds, geometric patterns, lights and animation. It's a colourful visual that reflects the dance-y, uplifting vibe of the track - despite the contrastingly depressing lyrics.

The band are also set to embark on their summer European tour which kicks off with 6 dates in the UK and Ireland. They'll begin at Dublin's Olympia on June 15th 2017 and conclude their UK shows at Edinburgh's Usher Hall on June 22nd. It also includes shows in Belfast, Manchester, Bristol and at London's Royal Albert Hall. 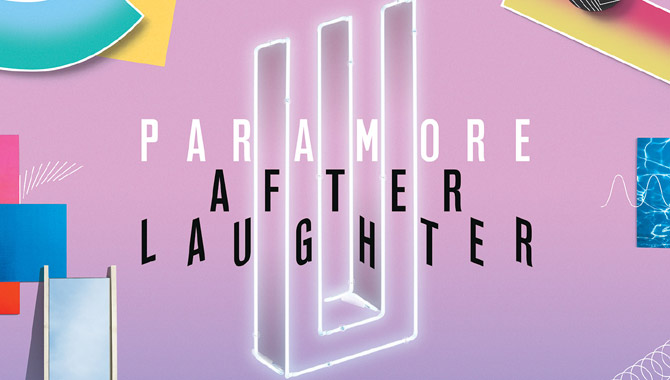 'After Laughter' will drop in May

For the rest of the summer they'll perform in Germany, the Netherlands, France, Austria, Hungary, Czech Republic, Sweden, Finland, Denmark and Norway. That includes appearances at Volt Festival, Rock for People and Ruisrock. Tickets for most of the tour dates will be made available on April 28th.

Since the last record release, lead singer Hayley Williams has been a guest on a handful of other songs including Chvrches' 'Bury It' last year, New Found Glory's 'Vicious Love' from 2015 and Zedd's 'Stay The Night' from 2013.

'After Laughter' is set to be released on May 12th 2017 through Fueled by Ramen and Atlantic records.