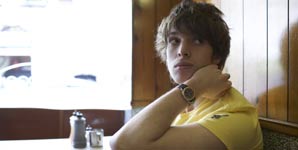 Introducing Paolo Nutini, a 19-year-old singer/songwriter from Paisley, Scotland, whose debut single 'These Streets' will be available as a free download on May 30, released through Atlantic Records. This will be followed by the single 'Last Request' on July 3, and Nutini's debut album, produced by Ken Nelson (Coldplay/Gomez), on July 17.

Nutini's songs suggest he knows an awful lot about the vicissitudes of life and love, and demonstrate his unique gift for expressing in song the attitudes and experiences of someone his age. Debut single 'These Streets' records his experiences of moving to London, a song which wistfully name checks the places in which he grew up and is sure to strike a chord with anyone who has ever lived in bedsit-land.