Review of Sunny Side Up Album by Paolo Nutini

Review of Paolo Nutini's album Sunny Side Up. 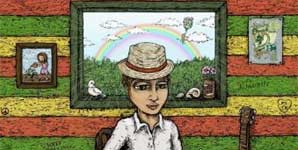 Scotchman Paolo Nutini and his band of Vipers return with 'Sunny Side Up' off the back of widespread acclaim for his 2006 debut. Although 'These Streets' received glowing reviews, it took a substantial amount of time to grow on the public. Has Nutini's latest offering got what it takes be an overnight success?

The opener '10/10' is a reggae/ska based song with the usual slurred vocals from Nutini. Either Nutini has suffered from a debilitating illness since his last album or he is attempting to create his own singing style. His vocals at times have the sound of an 80 year old pensioner, once you get over this fact however, it becomes easy to live with.

The next track 'Coming Up Easy' opens with some soulful Rhode's piano giving the track a sixties RnB feel, the vocal slurriness remains as bongos and are added to this laidback track. The track slowly builds in an Otis Redding fashion, allowing Nutini to break loose like he did on 'These Streets'.

'Growing Up Beside You' is a folk oriented number which sports Nutini's new 80 year old vocals and is followed by 'Candy', a country rock song about the want of the good stuff from his lady friend. This track allows The Vipers to do what they do best and could hold up in a game of top trumps with Ryan Adams.

'Tricks Of The Trade' is a Bob Dylan-esque acoustic and vocal track. This is then followed by what you could describe as a track from a butter advert.. A sort of jazz/ragtime number with some heavily laden with muted trumpets, it's a slightly confusing track which no respected muso will admit to liking.

It has to be said the second side to the album does not have any real stand out tracks, although the folk oriented 'High Hopes' with the picked banjo and 'Worried Man' have some charm.

The overall view of 'Sunny Side Up' is that at times it feels slightly confused but at the same time shows a more grown up side to Nutini, which will most probably create a switch Nutini's fanbase. This album at times does not allow Nutini to drift into the soulful Otis Redding style numbers as you would like, but it does provide eclecticism and grows on you with each listen.