Pantha Du Prince, aka German producer Hendrik Weber has established himself as a pro in minimal techno over the last decade or so. Across his three albums 'Diamond Daze', 'The Bliss' and 2010's 'Black Noise', Weber has delivered beats heavy, laid back, complete electronic music which tends to have a duality of being both relaxing and muscular, the way the beats, thick in tone, will counter the calm way in which they're executed as well as dreamy, hazy sounds. Pantha Du Prince is back with his first solo effort in six years, 'The Triad', but is it worth the wait?

'You What? Euphoria!' establishes what much of 'The Triad' is about, displaying that detailed layering is perhaps Pantha Du Prince's biggest strength. Through stacking various aspects on top of each other, he's able to fit many emotions into a song and take you to different places. However, it never feels like a mess, only tight knit due to how well all the elements work together. This track in particular features firm clicking beats, sparkly keys and this reoccurring sharp, buzzing sound which swings back and forth like a pendulum, all of which makes for a vibrant atmosphere.

'Frau Im Mond, Sterne Laufen' builds up with light, tapping beats that feel as organic as wood being patted on and there's colourful textures which have a strong presence, but don't hog the limelight. The sparkly aspects come and go, but when they arrive back in, they feel like these little sparks of joy rising within you.

By Dom Gourlay in Music Reviews on 12 February 2010 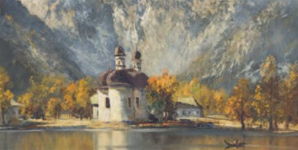