By Hayley Fox in Music Reviews on 17 December 2012

Aussie five-piece Panama recently released EP 'It's Not Over' and you would never have guessed that two members of the band used to be part of indie rock outfit 'The Dirty Secrets.' When a genre is flagged up on the computer it describes Panama as Dance or (gasp) R&B. So what's gone on here then? It's not as drastic as a transition from thrash metal to classical or vice versa, but it's intriguing one that sparks interest. 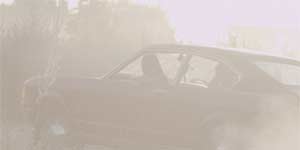 The clean synth vibrations that kick off the EP on 'Heartbeat' sound dud and lifeless when they are alone as the beginning of the track. But as the nostalgic vocal of Jarrah McCleary descends, everything begins to head in the right direction. He murmurs: "Take me by the hand you want me, take me by the hand you need me". It's only when the clapping beat arrives that it feels like a genuine song. The delayed start doesn't just delay the song, but as the opening song it gives a disappointing, flimsy start the album, as you wait for it to toughen up.

First Single 'Magic' has a funky downbeat, with some high voices and assertive synths, which all entwine to give an 80's assuring nod to others inspired by the similar era like Cymbals, Friendly Fires and Theme Park.

Continue reading: Panama - It's Not Over EP Review