Pamela Anderson has always been ''extremely careful'' about the men she introduces to her kids, but they are forming a budding relationship with their new stepfather Rick Salomon. 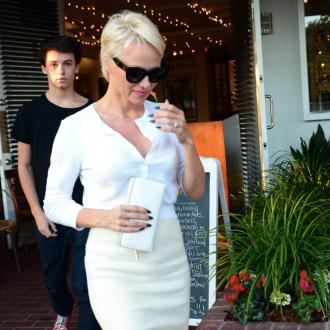 The former 'Baywatch' star has always been ''extremely careful'' about the men she introduces to her kids - following her split with their father Motley Crüe rocker, Tommy Lee, 51 - but Brandon,17, and Dylan ,16, have formed a budding relationship with their new stepfather.

A source revealed: ''Pam loves having the boys at home for their short break. It's given the Dylan and Brandon to spend more time with Rick.

''Rick has always been a presence in their life because of his friendship with Pam.''

Pamela revealed back in January that she had secretly remarried film producer Rick, 46, for the second time. The couple originally married in October 2007, but separated two months later.

According RadarOnline the 46-year-old blonde beauty is still on ''fairly good terms'' with her ex-husband Tommy Lee despite raising their kids on her own after their divorce in 1998.

An insider explained: ''[Pamela] keeps him updated on how the boys are doing in school, and always encourages him to call them at their school [but] Tommy Lee is often just living in his own rock and roll world.''