Pamela Anderson thinks men who can cook are ''appealing'' and claims their culinary prowess reflects their skills in the bedroom. 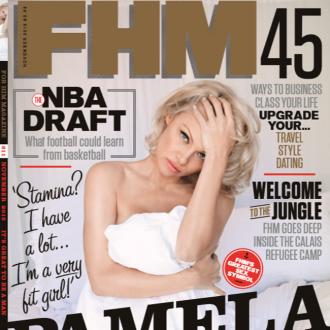 The former 'Baywatch' actress - who was previously married to Tommy Lee, Rick Salomon and Kid Rock - thinks a guy's ability in the kitchen can suggest a lot about what he's like in the bedroom.

She explained: ''I love beautiful food, and I love to eat outdoors. I love to cook.

''There are certain foods that are great for blood flow, like onions and ginger, and made sure you have plenty of vitamin C. It improves your sexual experience.

''A man that can cook is so appealing. It's a testament to their lovemaking skills; are they attentive and caring, or do they let the woman do all the work?''

The 48-year-old actress also admitted she still has one of the iconic red swimsuits she wore on 'Baywatch' and sometimes wears it to ''rescue'' guys.

Asked if she still puts on the swimsuit, she said: ''Of course. I've put it on, jumped in the shower and 'rescued' a few men over the years. Just at my house though. And with friends, too.''

Despite her pin-up status, Pamela - who has sons Brandon and Dylan with Tommy - insists she hasn't many pictures of herself in her home.

Speaking to the new issue of FHM magazine, she said: ''I've kept no covers. You won't find a photo of me in my house! No way. Well, maybe a few family shots of my boys and I, but no Playboy covers. No paintings, even. Oh, that's a lie. I do have the painting [Famous pop art artist] Ed Ruscha made me, a white 'Pamela' flying through a window with tyre marks.

''David LaChapelle always asks to show me pictures we've shot together. He says I'm the only one who never asks to see. I really love to shoot photos, but after the shoot I forget about it. Maybe that's the exhibitionist in me.''

For more from Pamela, visit www.fhm.com.